In 1997 Times journalist and working mother Rachel Kelly descended with shocking suddeness from a state of mild anxiety into a state of disabling depression. Over the next six years she gradually began to recover but was then hit by another bout of depression even worse than the first. She’s now sharing her moving and inspiring story of recovery in her recently published book Black Rainbow in the hope of helping others. The book is endorsed by Ruby Wax and psychologist Oliver James who says ‘Kelly turns the lead of depression into the gold of emotional health’. 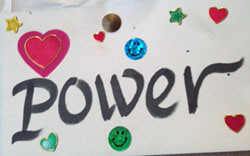 Pinned to my noticeboard in my study is the card decorated with tiny stars and hearts that I was given when I completed the Hoffman Process nearly five years ago. It’s a little yellowed now, and with numerous holes from multiple drawing pins but whenever I feel low or devoid of inspiration, I take a quick glance at its firm black capitals and the word they spell: POWER.

When I signed up to the Process, I certainly didn’t feel powerful. I was 43 and had a long battle with depression behind me. It all started suddenly. Sixteen years ago I was a Times journalist and mother of two. For no visible reason I went from feeling mildly anxious to being completely unable to function in the space of three days.

I wasn’t aware that depression could happen so suddenly and to someone who was so content with her life. My husband and I were happily married and ambitious. I loved my career and even relished the bustle of it: taking pride in having six pieces of writing on the go at once; always being ready with an idea for a new article rather than being satisfied with what I had achieved. I had no idea what qualified me for a mental illness associated with unhappiness and the surprising physical agony that I was to suffer every minute of being awake. 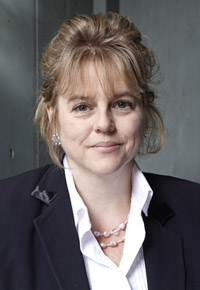 With the love of my family, medication and the consolation of snippets of poetry, I began to feel better. I returned to working full-time until I became pregnant with our third child. Years passed, two more children arrived, and my anxiety levels remained high: I was pushing myself to be the best mother and wife I could be, while still feeling I should work. Then I had another depressive episode even worse than the first. Depression had planted its insidious roots and seemed to be here to stay.

It was then that a friend suggested I tried going on the Hoffman Process. It would be impossible to say which elements of those extraordinary eight days made the most difference. I won’t go into it here, as the real effectiveness of the experience depends on an element of surprise. All I know is that when I left I had a new sense of purpose that I could make something positive out of the depression. I had the power that the card in my study now reminds me of.

The result is my new memoir Black Rainbow, which describes my recovery and includes the forty consolatory poems that made a difference and helped me recover. It started life as letters and emails to friends. They knew what I had been through: when they were down they turned to me for poetry recommendations that might meet their emotional needs. I had in fact been recommending poetry for specific maladies since university, years before I suffered from depression, a poetry pharmacist if you will.

Of course, the healing power of words has a long history. The ancient Egyptians would write a malady and let water wash away the ink. Early Medieval philosophers and theologians acknowledged the powers of language to transform reality as well as the mind. The first American hospital, founded by Benjamin Franklin, prescribed reading and creative writing as a salve for mental illness; as of 1969, the Association of Poetry Therapy has existed. 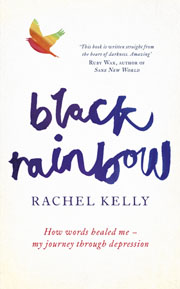 For me, poetry can connect a sufferer of depression – chronically lonely – with great minds from centuries ago. Someone else has felt exactly how you have felt and also provided you with a description of your mental state when you might not have the energy to articulate it yourself. My favourite poet, the clergyman George Herbert, was probably a sufferer and he asked a friend that he only publish his poems if he believed they would console others. Well, thank you George Herbert: they certainly have.

Aside from this, there is the cognitive stimulus of deciphering a poem’s complete meaning. It forces us to focus on the present rather than being overwhelmed by worries about the future or past which sufferers of depression have trouble compartmentalising. The subtler the poetry you read, however, the less space your mind has for those extra worries. In this way, reading poetry has a similar effect to practicing mindfulness, which the celebrated mindfulness expert Jon Kabat-Zinn describes as ‘paying attention in a particular way: on purpose, in the present moment, and non-judgementally.’ That perfectly describes what happens when I read poetry.

Black Rainbow: How words healed me – my journey through depression was published by Yellow Kite Books, an imprint of Hodder & Stoughton in April 2014. Its companion app is available at the iTunes store. You can read samples and download the app at: wwww.rachelkelly.co.uk or connect with her on Twitter: @rache_Kelly