Taking the Drama Out Of a Crisis: with Jay Green

Director of Drama at Brighton College

Jay Green’s teaching career began in a classroom in Surrey in 1989. Now he’s the Director of Drama at Brighton College and in this interview he reflects on how doing the Hoffman Process in 2013 has affected work and family dynamics – with a little help from his teenage daughter, Stella. 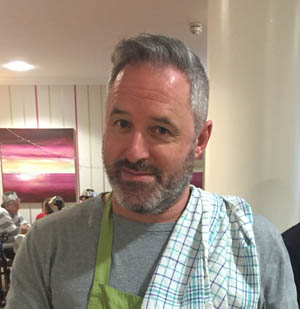 One of the gifts you say you took from the Process was being able to embody more of your own identity – to be more authentic, vulnerable and unconditionally loving. How has this affected your relationships and sense of connection, at work and at home?

There are two different sides of myself at work and at home but what’s important is that they’re rooted in the same truths and identity. Mr Green and Dad remain on good terms but each knows where the other begins and ends.

Mr Green: My relationships with the children I work with have probably become more empathetic and good-humoured since the Process. The twin challenges to teenage identity remain the same as they ever were: priapic self-confidence hand in hand with existential angst. It’s either all thrusting out or turning inwards and there are no half measures. Teenagers either stalk the streets in packs beneath a full moon or sit in their bedroom dreaming of their place in the stars. Once you’re aware of them, working with people on both those paths is enjoyable and rewarding.

Dad: There was a period after the Process where my kids would dread going out with me in public as I’d start conversations seemingly randomly. As I’ve moved on I still try to be self-aware but, like everyone, it’s a work in progress – I realise that’s why they call it a process.

I’ve calmed down a bit now, so that hitherto conscious changes sometimes occur subconsciously in those rerouted neural pathways but I can still drop into an old pattern or a vicious circle of emotional reaction with the best of them. My 17 year old daughter Stella is particularly adept at rerouting me to my Hoffman toolbox when I slip into old ways of reacting. 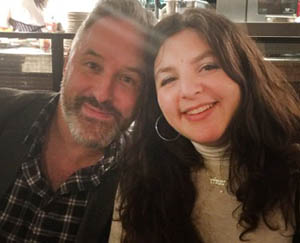 Stella: Occasionally the words “Dad get back in the Hoffman zone” are mumbled by my sister and I to a stressed or anxious dad (who actually seldom appears since the completion of the Process). A deep breath is then heard and lo and behold a seemingly calm and tranquil man returns. A man of great wisdom and little worry…although perhaps one with too much fondness for incense.

Do you feel your approach to teaching or your own parenting has changed since you did the Process?

For sure. The deconstruction of the ego that’s intrinsic to the Process and the separation of my identity at work and at home is really useful. Someone like me, who drew much of their identity from my father’s attitude towards work found it helpful in so many ways.

It’s especially key in the arts where the blurring between life and work can be problematic when transferred into a family environment. I mean no one wants a painter or a film maker or a theatre director sitting at the table with you in the evening, you want your dad.

The Process develops mindfulness and self-awareness, because as you review and integrate the past, you’re able to bring more attention to the present. Has this helped you in dealing with teenagers who, as you say, tend to be absorbed in the now?

Mr Green: In short, yes, it has. Once you start to wrestle consciously with living in the present, having adolescents around whose instincts are to do nothing else but that is actually a great help. They pull you into the moment like nothing else. If you don’t follow, they’ll eat you!

Dad: When my own daughters are caught in the present to the detriment of perspective and general happiness, I find it helps to encourage them look back at what’s gone before and forwards to what will surely follow. I’ve noticed this transition usually involves a cup of tea or occasionally chocolate.

You mention that some of the hallmark emotions of our teenage years are grief and the loss of the emotional innocence of childhood. Could you say a bit more about how the Process helped you to integrate those feelings? 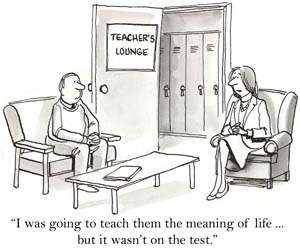 Mr Green: Again, in the studio or classroom it’s a question of empathy. Teenage years are a difficult time which seem very absolute, full of black and white moments. When you start to deal with adult ties and responsibilities you realize that none of us ever completely escapes doubt and uncertainty. They can certainly ambush me when I’m teaching. A school is a loaded environment full of possibilities for transference and counter-transference.

Dad: Seeing your own kids go through those hoops and teenage rites of passage is always the greatest trigger for your own past. I’ve found that the more you can integrate your feelings about your own childhood – and the Process is great for this – then the more your children’s lives can be about them and not yours by proxy. And that can only be helpful for everyone.

As you say, teenagers now are facing a very different world to the one their parents grew up in. Faced with academic pressure, raging hormones and the myriad of options open to them now, the temptation to escape into a virtual digital world must be immense. What are some of the problems you come up against in dealing with them and do you have tips on how to keep teenagers anchored and interacting in the real world?

Mr Green: I think it was A.J.Ackerley who said ‘unable to love each other, the English turn naturally to their dogs.’ It’s still true today but you can probably substitute teenagers for the English and mobile devices for dogs. I’m lucky in that teaching theatre allows for very little virtual escape and relies on those communal moments when you have live humans dealing with being in the present. It’s a sort of a mini-Process if you get it right – one group of people telling another group their story and sharing an authentic moment.

Dad: Every family has their own variation of a cult, right? Ours is one where I’m now both outnumbered as a man and largely outdated as a social being (as I can tell by the regular deployment of icy irony when I manage a simple technical task.) My daughters have all the wisdom and vision they need. Occasionally I might point out that it would be great if they could empty the dishwasher but that’s about it. Otherwise, the only advice I could offer anyone would be to hug them, tell them you love them, hug them, tell them you love them and go see great art with them. This is my own particular thing, I know. See gigs together, go to the cinema and theatre together, try to cook and eat together…and did I mention hug them and tell them you love them. Unconditionally. 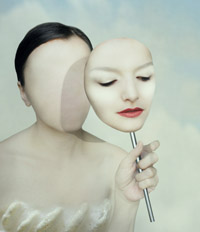 There are some dramatic moments in the Process – for example you’re asked to step into the role of a younger version of yourself or to imagine your parents’ childhood. With all your professional experience did you have a different perception or a greater appreciation of the role of drama after the Process? Can it actually be cathartic and even insightful to make a drama out of a crisis in a controlled environment?

Mr Green / Dad: Here’s the thing. For me, I don’t think it’s necessarily about drama or theatre. It about why people are drawn to art. It’s a way of reaching in and expressing conflict. It’s why people go to the theatre, watch films and read books, why they paint, dance and sing – to experience and touch the conflict that’s part of being alive.

The Process consciously delves down into those watershed moments but whether you’re a self-conscious teenager or a grown-up flailing through a mid-life crisis, experiencing an external expression of the conflicts and chaos in those moments is only ever enlightening and positive. Repression will get you in the end!

Top Tips for dealing with Teens

• Just because you did it, felt it or liked it, doesn’t mean they will.

• Common ground might include you but there need to be times when it excludes you too.

• You may know at some level that it’s all going to be OK, but, if you’re the parent of teenagers, be prepared for nights when you’re still awake at 4.48am gripped by fear.

• Listen. Don’t talk, or nod or uh-huh. Just listen and be present.

• Be there. Have moments when your time is for yourself by all means but be prepared to be there, unconditionally, always.

• Boundaries: hold the line. Sometimes you may need to be perceived as a neo-fascist jerk. It’s the job.

• Stella: Let them make their own mistakes. Let them like and hate what and who they want to. And yes, you were that age once too but accept that sometimes you cannot understand them and that’s okay.

Jay Green is Director of Drama at Brighton College. He consults on educational matters for individuals and institutions and delivers various teacher workshops, including emotional dynamics in the classroom. He can be contacted at jjgreen@mac.com.