Stepping Off the Treadmill – Stuffocation

After Strategy Director Thiru Wallman did the Hoffman Process in 2009 she came back feeling much more confident about starting a family with her husband James, a journalist and trend forecaster. James did the Process two months later and in 2013, when their little girl was two, the couple decided to ‘go for the dream rather than the treadmill’.

As a result of their mutual vision they’re now expecting their second child and James’s debut book Stuffocation has been published to critical acclaim. Laura Atkinson at the Sunday Times described it as ‘The Tipping Point meets Freakonomics. Fascinating, inspiring, and great fun to read‘.

Thiru: ‘2013 has been such an exciting and challenging year. Since doing the Process James and I regularly review our family vision and if one of us has a wobble between times we discuss it. At the start of 2013 we set a goal for James to go freelance and publish his first book whilst we tried for our second child. When I found out I was expecting a boy – due in March 2014 – many people thought that we’d be focused on increasing our income to fund an extension, but our priorities have changed since doing the Process.
It wasn’t an easy decision for James to give up his job but once we’d imagined a future that really lit us up we knew we needed to act on it; that was an insight I’d taken away from the Process. If I hadn’t supported James I feel sure I’d have ended up married to an increasingly unhappy man. He would have accepted a different decision from me but deep down I was concerned that he’d eventually feel resentful at not following his dream.’

Going for the Dream

James: ‘Thiru came back from the Process so empowered and clear. I could see how she’d grown and I wanted to be in a position to move with her. I was between jobs at the time so I decided to go. I’m so glad I did. It was a fantastic experience and since then we’ve both gone for our dreams. Writing my first book was like climbing a mountain and the view from the top is magnificent. It’s brought me such confidence and Thiru has supported me all the way. 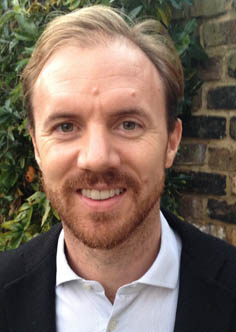 The original working title of my book Suffocation was  The new lifestyle of the rich and courageous. It tells the stories of people who have had enough of stuff and who are living extraordinary lives as a result, like technology millionaire Graham Hill, for instance. In the end he felt stifled by all his possessions so he dramatically downsized to a flexible and ingeniously designed apartment in New York. His is just one of many stories in the book of how some people are reacting to a society that’s becoming increasingly disillusioned with the idea that ‘he who dies with the most toys wins’. The new mantra is ‘don’t waste your life managing unnecessary stuff’.
The premise of Stuffocation is that doing stuff makes us happier than having stuff; a link which has now been proven. That’s not to say that possessions don’t make us happy, they can certainly be fun, they just aren’t the best place to invest your time and money for long-term happiness.
As a professional trend forecaster I’ve been aware that the answer to the question: ‘How should I live?’ has fundamentally changed. I’m not anti-capitalist. I don’t think people should stop spending – simply that they should spend money on experiences rather than things.

There are six main reasons why experiences bring you more happiness than things:
Positive re-interpretation. A faulty product simply leaves you frustrated and disappointed, whereas you can look back on experiences that don’t go according to plan through rose-tinted glasses. Your most challenging experiences can become hilarious or inspiring embellished with hindsight and a dash of poetic licence.
Bonding. Talking about a new possession you’ve acquired is usually of limited interest unless the listener shares your obsession with soft furnishings or collectibles, whereas describing an experience gives the listener a chance for empathy and connection. Experiences are also often shared with others which creates a memory that you can look back on together.
Status. Possessions tend to invite comparison, such as who has the most powerful car or the most expensive watch, which creates a sense of separation. Experiences, on the other hand, allow you to find common ground and can bring you a sense of belonging, such as when you discover that someone else also enjoys bird-watching or extreme sports.
Subjectivity. Even if experiences appear better or worse at first glance, they are always subjective. A holiday in the Maldives may seem preferable to one in the Lake District, for example, but if the person in the Malidives has unpacked a mountain of unresolved problems together with their sun tan lotion whilst the other is enjoying a romantic honeymoon, their experiences won’t be reflected by their surroundings.
The Hedonic Treadmill. This expression describes the idea that the novelty of any new possession will eventually wear off. Experiences, on the other hand, often have a much more long-term affect.
Identity. Experiences contribute more to your personal development and identity than things. They become an irreplaceable part of who you are. After all, you can’t give away an experience whereas you can give up your possessions whenever you want.

From Materialism to Abundance

Historically 20th Century materialism took us from scarcity to abundance. My grandparents for example, married in 1940 and lived in just two rooms. Communal rooms such as the bathroom were shared with other tenants. As my father grew older he was given the bedroom and my grandparents made themselves up a bed in the other room each night until the1960s when my father left home. Their experience is typical of the way abundance and expectations have changed dramatically from one generation to the next.
Economically speaking, the western paradox is that if you want to have more, you need to spend more. Materialism is the value which underpins consumerism. In the past materialism made us happier and gave us social status. By being materialistic, people were creating abundance for their children. However we’ve since seen that materialism leads to all sorts of problems, such as creating a scarcity of resources. It’s damaging our ecosystem and lowering the quality of our air, food and water.
Psychologically, people have also discovered that being materialistic brings up status anxiety because you can never keep up with the Joneses. You’re in a constant game of snakes and ladders. With each social encounter we perceive someone as above or below us, underlining where we are in the social heirachy.
In terms of our mental and emotional health, mass production has lead to mass consumption which leads to mass depression – and more and more people are now waking up to this. In the 1970s 80% of people said they were materialistic – now it’s 50%. In a post materialistic world people increasingly feel that quality of life is more important than survival needs.
Technologically speaking we’re moving rapidly from real things to virtual things such as CDs to IPods and books to Kindles, so it’s become easier and easier to live with less possessions.

In the 20th century the best path to happiness, status, and meaning was through stuff. But now, in the 21st century, it’s through experiences. By having fewer things, and more experiences, the planet will benefit, and you’ll be happier too. Many people are already making the shift. As a forecaster, I’ve seen the signs of this happening. So the book isn’t only a warning, a manifesto, and wishful thinking – it’s a forecast.

Stuffocation is available on Amazon.

Visit stuffocation.org to take a quiz to find out if you’re suffering from Stuffocation.

The US edition of Stuffocation is due out on March 7th 2014.