Mindfulness and the Hoffman Process: with Sonia Doubell & Marc Pouw

Many of us are so caught up in the external demands of our day to day life that it can be easy to forget what is really important in our life or even stay aware of how we’re reacting to events and relationships. Taking regular time to connect within can bring tremendous benefits – a calmer mind, a less stressful life and a healthier body.

Looking beyond appearances – Focusing within 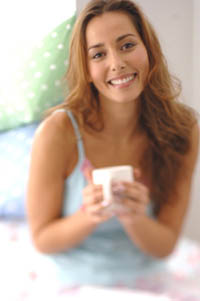 Although now living in London, Sonia was born and brought up in South Africa. She began her working career as a model but soon realised that there was more to life than appearances and yoga became the key to unlock a much richer inner life. She did the Process in September 2009.

‘My childhood in South Africa was quite disrupted, as my parents divorced when I was only four years old so I was sent to boarding school aged 5. At that point in my life I felt like a tree being uprooted. I stayed at boarding school until I was 12 when I went to live with my mother and stepfather. They moved constantly so, although I started a Roman Catholic day school, this was soon followed by a succession of schools until my mother and stepfather finally moved to Canada when I was 16. I’d already started modelling at 14 so I remained in South Africa and lived alone, learning to be independent at a young age. I did go and live with my father for a while, but once I turned 18 I left South Africa for London to pursue my modelling career.

Wherever I went there I was – East meets West

Modelling began as a way to support myself and I lived that life with a survival mindset. I had this supposedly glamorous enviable lifestyle, yet I felt empty inside. According to the world around me I’d ticked all the boxes to be happy, yet I felt I was in a void. It was at this time that I was drawn to Buddhism and Yoga. As my family background was in organised religion these Eastern approaches felt quite different. They focus on why there is suffering and help you to understand the nature of being human, without asking you to believe in any specific deity. I began to cultivate a passion for listening to inspirational teachers such as Wayne Dwyer and Eckhart Tolle and I spent time in Ashrams developing my own yoga practice. Yoga helped me to stop chasing an illusion and to find out what really made me happy. It also made me aware of personality patterns that weren’t serving me at all.

Finally in 2009 one of my friends did the Process and he came back raving about it. I’d been planning to go on holiday but my partner encouraged me to go to the Process instead. I’d had a relationship break up and a lot of other changes in the preceding months and it seemed to offer a chance to stop the merry-go-round and review where I was heading.

The Challenges and Gifts of the Process – Experiencing Oneness and Presence

Although I’d never done therapy I had spent a lot of time in self-inquiry, so the principles of the Process were familiar and I just dived straight in. One of the hardest parts for me was allowing myself to connect to the anger I felt with my parents’ patterns and what had happened to me as a result, because I’d censored that feeling from such a young age. However the physical bashing that we did to awaken and release anger from the body and the support of the teachers really helped. As the course neared the end, one of the most powerful aspects for me was sharing in small groups, as normally I am the person people come to with their troubles so it was very freeing to feel safe to share my own feelings. I feel that we live behind protective layers which creates isolation and competition, whereas sharing truthfully from the heart helped me see that our pain and insecurities are all the same, no matter the outer façade – it was very unifying.

Another aspect of the course that I so appreciated was the chance to hand over mobiles and be in a media-free sanctuary in beautiful surroundings where I could explore my own values and my own truth. If you live in a big city, as I do, it’s easy to feel divorced from nature but it’s essential to reconnect to that, because it’s where we get our life force from. That’s the energy that gets us out of bed in the morning with a zest for life. It’s easy to get caught up in a slipstream of consciousness where the media is telling you how to live.

After the Process I felt incredibly light in every way. It was an amazing feeling of being really ‘clean’ and my brain felt uncluttered. Nothing mattered apart from the present moment. Whilst my story existed, it didn’t matter, I could detach from it and choose to tell a new story. I realised how I’d held myself back by constantly judging myself.

Gymnastics for the Soul

My partner was so impressed by the change in me after the Process that he went and did it too. I didn’t find the Process a magic bullet and I didn’t stay at that high point forever but it helped me shift things that were stuck and it gave me the key to experiencing life on another level. Since the Process I use the quick check-in tool that they teach you on a daily basis to stay aware of my inner world. It’s as essential to my routine as cleaning my teeth. Like physical exercise it needs to be regular and I’d describe both Yoga and the Process tools as gymnastics for the soul.

I now see that although I had a very disrupted childhood I can choose to focus on the positive or negative aspects of that. On the plus side it helped me develop strength and independence. I now travel solo all over the world with a wonderful sense of adventure and find it easy to adapt to new circumstances. Whatever life brings I feel that now have the tools and the confidence to handle it.

Find out more about Sonia’s yoga teaching, watch her demonstrating different yoga routines, and her tips for diet and lifestyle to keep you feeling at your best. As a holistic journalist she has also interviewed many inspiring speakers such as Byron Katie, Hoffman graduate Sonia Choquette and the Barefoot Doctor. Visit Sonia’s website here. 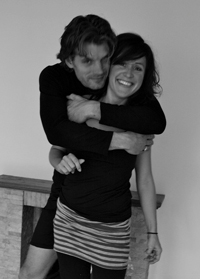 Some years ago my wife Barbara trained in Ashtanga Vinyasa yoga which she found really helpful in shifting depression. Drawn in by her enthusiam I enjoyed the physical side of yoga so much that I trained to teach it myself – then I noticed that it was affecting the way I thought.

Research has shown that meditation and yoga changes neural pathways in the brain and I found myself starting to go within. This was something that I had always avoided, as my family pattern was always to focus on the positive and not allow ‘negative’ thoughts, so yoga became a gateway to a spiritual connection and personal change.

Since doing the Process I find I’m calmer, more open, more honest and have more integrity as a teacher. I find that the principles of yoga are 100% aligned with the Hoffman Process. I did yoga with some of my Process group and five of them have continued to do it. The philosophy of yoga is non-attachment. Rather than be influenced by what others think, you’re encouraged find your own truth, which is very much what you learn on the Process.

Barbara and I have recently moved from Belgium to an area near Los Angeles. I’m still running the Yoga Loft from a distance but we’re also setting up a yoga studio near our new home, so if anyone in that part of the world is interested in doing yoga they can email me at: marc@theyogaloft.be

Visit the Yoga Loft website, based in Brussels: www.theyogaloft.be