Releasing Grief… Getting Back on Track

Bereavement: Sometimes we feel stuck in our life – unable to decide which path to take. A holding pattern like this can indicate that our emotional baggage has become too heavy. When Stacey decided to stop avoiding her past emotional pain and do the Process, the way ahead became clearer and brighter and her anxiety and insomnia disappeared.

Stuck in Grief… Getting Back on Track – Stacey Grahame. 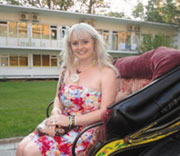 Stacey did the Process in August 2011. She was 28 at the time and an only child with one half brother. She had lost both her parents in the previous eight years and felt stuck in a rut. She realised that she had patterns of keeping busy and helping others in order to avoid her own problems and feelings, but she couldn’t see how to change.

‘Before the Process I was plagued by insomnia and a recurring dream in which I was standing on railway tracks at a junction where the track divided in many directions but I didn’t know which to choose. I had been procrastinating about doing the Process for two and a half years until finally I went to a Hoffman Introduction Day. During that afternoon we did a meditation in which I found myself back on the railway track and I realised that, though each track went into a dark tunnel one of them led into a bright place full of light. Not only that, but there was an express train bearing down on me so I needed to hurry up and make a decision!

The next day I finally plucked up the courage and rang the Hoffman office. I had quite an extensive conversation because I wanted to sign up to a Process taking place in August and my mother had only died that April. Normally you can’t do the Process so close to a bereavement but it was agreed that I was robust enough to cope.

Unpacking the Past in Safety

I arrived at the Process thinking that I was aware of all the problems that I needed to deal with, but then my small rucksack of emotional baggage rapidly turned into several large suitcases! It was fine though, because there was so much loving support as I sorted through it. It was so safe at the Process. I could just be how I needed to be, I wasn’t being watched or judged – that’s what’s special about it. It’s the most intense and humbling experience I’ve ever had. I had a pattern of keeping my feelings and problems to myself. I thought I should always sort things out myself but that week I learned that I’m not on my own – you never are.

When we came to the part of the course where you release anger at your parent’s patterns by bashing a cushion with a wiffle bat I felt totally self-conscious and I didn’t want to do it. I didn’t think I was angry about my father’s patterns and I didn’t see how bashing could help – but it was a revelation – I got through two and half bats! I was able to understand my father for the first time because I had cleared out the anger that I didn’t know I had. There was space instead for compassion and forgiveness – an understanding that he had been subject to the same patterns from his parents too.

Two days later we came to a part of the course where we consider our life and how it would look as we prepared for the end of it. Had we got our priorities right? Had we expressed our deepest feelings to those we loved? Had we followed our heart and pursued our dreams? Two hours of that morning were a complete blank to me. I finally went through the tunnel and began to mourn my father. When I came back to awareness I knew I’d begun to grieve properly. It felt like a heavy weight that I’d been carrying around for the past 8 years had loosened its grip, as I released the sadness. Suddenly positive thoughts and possibities for change began to find space in my awareness.

One of the most treasured memories of the course which marked a turning point in coming to terms with the loss of both my parents happened in the early hours of the morning when I was looking at the stars with Adela, another girl from the course. Something so amazing happened that it bonded us for life. We both looked up to the sky during a heartfelt conversation to say hello to the people we’d lost. We both said how we liked to think the big stars were people we love watching over us. On the dot of finishing our ‘hellos’ to those we’d lost, the biggest, brightest shooting star you can imagine soared right in front of us – it was so bright it looked like a movie special effect! We both squealed, grabbed each other and burst into tears – some of our housemates even came running out to see what had happened. The next morning we also realised that on our mandala pictures that we’d drawn the morning before, we’d each drawn a big shooting star. How fabulous.

Last September Adela and I spent the weekend doing ‘fun’ things and went on a photo shoot together. As self confidence was an issue for us both, it was great to share the experience. We had an absolute blast and were able to take home lovely photos of the friendship we now have for life. Even though we live in different countries we speak all the time and visit each other often. I’m so blessed to have found a friend like her. That night changed my life because I realised I’d never be on my own, even when people aren’t physically there with me, they’re still around. After the Process I went to where my father’s ashes were scattered and came to a place of peace with our relationship.

The first change I noticed when I got home was that I started sleeping normally – I’d had very bad insomnia since 2002 so that’s been a huge unexpected benefit – and the train dream has stopped. Before the Process I used to stay busy so that I didn’t have time to think and I avoided being on my own. Now I love my own company so much that I even take myself away for weekends! I’m more relaxed than I can ever remember. I also had a pattern of helping others and neglecting my own needs. Now I’ve realised that it isn’t selfish to take care of myself – my own wellbeing impacts others too. I still use the Process meditations and CDs and I love the exercise that we learned where we check in with the spiritual, emotional, intellectual and physical parts of ourselves. I do that in the mornings to see how I feel and what I need before I start the day. There’s something very profound about asking yourself how you feel. All these parts of ourselves are always telling us what we need but we so rarely listen.

I went to the Hoffman summer party last year and I’ve been to Reconnection Days and I’ve even been back to Introductory Days to answer questions.  As I do more Hoffman events I realise that it’s not just my Process group that I’m connected to, but with every event the circle grows bigger.

I currently work in the fertility services for the NHS and I used to have another work role there too, but since the Process I’ve given that up and started doing more creative work: acting, website design and event organising. Before the Process I used to worry that my work path was unclear but now I’m much more comfortable with not knowing and simply being more spontaneous.

I really wanted to share my story to help others and I’d also like to acknowledge the wonderful hospice which looked after my mother. You can contact them for help in organising fundraising events or to give donations at: wheatfields.fundraising@suerydercare.org. I’d rather people emailed them direct than go to the Sue Ryder website which doesn’t necessarily allocate funds to her specific hospice.

Sue Brayne, author of The D-Word: Talking About Dying. is a psychotherapist and former Hoffman teacher. She and her husband Mark, who is also a Hoffman graduate, offer support, training, expertise and inspiration in all aspects of trauma and bereavement.

The grieving process allows us to work through our losses. It helps us to accept the pain of letting go and adjust to a new way of life. Grieving is not about forgetting. It is about understanding that our losses, however painful, shape our life and give us profound opportunities to do things differently.

Unfortunately many of us have been brought up to deny our grief and bury our feelings. However, unprocessed grief is emotionally toxic. It can cause us to feel helpless, anxious, depressed, and powerless. We may find it difficult to trust other people, or we may be constantly seeking something we can’t find. We may become caught in the past, yearning for those ‘better days’, or have an irrational fear of entering into relationships. We may feel something is missing – a hole which cannot be filled, or believe life is something that has to be endured.

The Hoffman Process provides a safe place for you to look at unexpressed grief and loss of all kinds, possibly for the first time in your life. This helps you to understand how your losses have affected your ability to form loving relationships and to find meaning and purpose in your life. This is done during a beautiful ceremony where you can honour, cherish and release those who have died. The work is compassionate, intensely loving, and liberating, allowing you to see life through altered eyes.