Mindfulness at Work: with Jon Treanor

Interview with a Mindfulness Mentor

Jon has more than 35 years’ experience in international senior management with companies including Universal Studios, Paramount Pictures, Sony Corp and Philips NV and he’s been mentoring business executives and high achievers for over 12 years. Having experienced a difficult childhood along with homelessness, Jon has spent the past decade facing his demons and learning from his own personal experiences.

I came to mindfulness in 2009 after doing the Hoffman Process and participating in a TV programme called The Big Silence. I decided that the two complemented each other and formed my unique approach mindfulness mentoring. I work along the same principles as Mark Williams, who is Professor of Psychology at Oxford University. His ideas can be found in his insightful book ‘Mindfulness: Finding Peace in a Frantic World’. 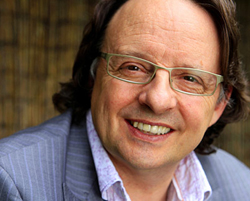 When I arrived at the Process in 2009 the financial recession was already evident, with stormy weather ahead. I felt that I had to choose to be part of a catalyst for change or get caught in the coming tsunami. So much stress is caused by feeling powerless to change anything, which starts a chain of fearful, negative thinking but the Process showed me where personal power lies and that profound change is possible. My biggest realisation on the course was that I’m not only more than my job; I’m actually more than my thoughts too. The Process provided a retreat where I could go beyond ego and move into a more authentic self. Although life still offers constant challenges, the way I react now is quite different and far less stressful.

Originally the financial recession was forecast to last two years but now it’s clear that the global economy is simply not working. The media is predicting that many of us will have to work until we die – because for some retirement may no longer be an option. Once upon a time you could say; ‘it’s as good as money in the bank’ – well you can’t say that now! The moral compass of capitalism is out of kilter and it lacks a sense of wider responsibility. The question we’re facing now is: how are businesses going to survive and thrive in the 21st century?

On the plus side we now have instant communication – the world is in your hand in the form of your phone. However the down side is that we no longer work 9-5pm; you can be contactable 24 hours a day. Being ‘away from your desk’ is no justification – indeed the most common question posed when you answer the phone is ’where are you?’ In an instant world we demand instant responses and that creates tremendous stress.

This is why I’m on a mission to bring mindfulness into the workplace, because these days people sometimes have only seconds to make decisions which can turn out to be critical – decisions that may even cost them their jobs. They may feel that there isn’t time to gather all the relevant facts, to look at the bigger picture and the long-term consequences. Today’s executives are being asked to make many more decisions in a shorter time span which can lead to ‘decision fatigue’. This level of stress can affect someone’s self-confidence, making them uncertain. This can mean that they delay or avoid making decisions, leading to organisational inertia. Either that, or they may play safe to avoid becoming a potential scapegoat, so that essential change is not initiated.

Business priorities such as offering shareholder value, increasing market share and profitability are all under threat if the quality of senior executives decision-making is in question, so this level of management is where mindfulness training can make the biggest impact. Once they experience the benefits, senior executives are also in the best position to recommend it at all levels within an organisation. In discussions I’ve had with the UKs leading business schools they too have recognised the importance of mindfulness, stating that it’s not only important in business but in all areas – these are life changing principles.

What is mindfulness? Michael Chaskalson an experienced British mindfulness teacher and the author of The Mindful Workplace (Wiley-Blackwell), has defined mindfulness as ‘a way of paying attention to yourself, to others and to the world around you. And it’s a quality of attention which is open, kindly and non-judgemental.‘ This is very much in line with the Hoffman Process. Course participants are encouraged to find a level of self-acceptance and compassion for themselves and others which allows them to be fully present to the moment.

Neuroscientific research has compared brain scans of someone who is feeling stressed to when they’re acting mindfully i.e. living in the moment. When we’re under stress, the primitive part of the brain goes into survival mode. In this state of emergency, instead of being better able to handle challenges, the brain begins to close down. Our vision narrows and instead of thinking laterally and creatively we’re only able to obsess about the problem and feel increasingly anxious. Mindfulness, on the other hand allows us to be more productive, innovative and emotionally intelligent.

The Results Speak For Themselves

Companies such as Google, AstraZeneca and Transport for London who have already introduced mindfulness training are seeing quite amazing results. For example Transport for London ran a 6 week stress reduction course attended for two hours a week by all employees who met a certain criteria. This included mindfulness as well as other traditional stress reduction techniques, such as CBT. Days off for stress, anxiety and depression dropped by 71% over the next three years while absences for all conditions dropped by 50%. There were also qualitative improvements, with 80% of participants reporting improvements in their relationships, 79% improvements in their ability to relax, 64% improvements in sleep patterns and 53% improvements in happiness at work.

My sense now is that traditional business models aren’t working. Increasingly businesses need to demonstrate values and a conscience. The business world needs to ask how it can move forward differently; it has to be open-minded and willing to change in the same way that people change most effectively – from the inside out. Propaganda marketing, internal enquiries and superficial reshuffles are just symptoms of anxiety – like shuffling deckchairs on the Titanic. If we don’t want the ship to go down then we have to take personal responsibility for our part in changing the collective unconscious and start a viral campaign for changing awareness in the workplace. Both Hoffman and mindfulness have an important role to play in that.

Jon is based in Oxford and London and offers phone, Skype and face to face mentoring along with mindfulness leadership training. For more information visit www.jontreanor.com