Masks and masculinity: by lecturer and researcher Rob Dean 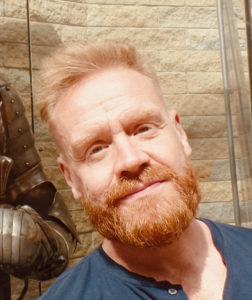 It was a rather elegant mistake that brought me to Hoffman. Seven years ago, I was in a relationship with someone who had completed the Process. After we’d been together a few months she told me a bit about it, how it had helped her, and suggested that it could help me to understand and address my issues. I remember feeling quite affronted. ‘MY issues indeed! I’m totally aware of what my issues are and quite capable of handling them myself, thank you very much!’ Then over the next 12 months I proceeded to systematically destroy our relationship – like I had every relationship before – through detachment, infidelity and truculent criticism.

And so it went, and so it had always been with me since my early teens. Sometimes it hurt, and sometimes I didn’t feel a thing. Any heartbreak caused (or endured) was justified in the name of self-protection. However last year, following the demolition of another relationship, I began emotionally unravelling. I remembered the course my ex recommended, but couldn’t remember the name, or any Google-able search terms to track it down. The bridges to my ex had been so thoroughly burnt that all attempts at contact received no response. I was stuck. Then the elegant mistake was revealed.

I’d recently submitted a chapter for a book about Gothic drama to a publisher. The chapter referred to a sociologist called Erving Goffman who had written about the ways in which people perform versions of themselves in everyday life. The publisher contacted me with a list of mistakes they had spotted, and their e-mail read as follows; ‘At the beginning of the chapter you refer to Goffman, but from page three onwards the spelling changes to Hoffman, which one is correct?’ The word leapt off the screen. I opened a new browser, tapped in h-o-f-f-m-a-n, hit search, and there it was, the Hoffman Institute homepage.

I would like to say that I took this fortuitous coincidence to be divine intervention and acted upon it instantly. But I didn’t. I celebrated in the same way I commiserated. Whether it was to mark a happy occasion, relieve stress, stimulate socialising, anaesthetise pain, counter depression, or alleviate boredom, the approach was the same. I got wasted – on drink and/or drugs – and hoped that when I came round my problems would have been erased. As if just finding the Hoffman homepage was enough of a step in the right direction to get things back on track. 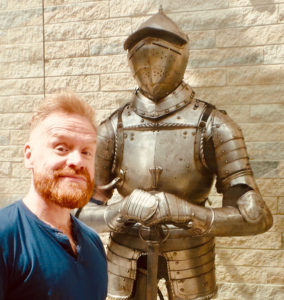 But this was how I handled ‘my issues’. Not only were these methods tried and tested, they were culturally condoned. I certainly wasn’t alone in dealing with my problems this way. In the social circles I moved in, this behaviour wasn’t just acceptable, it was expected. It was all tied up with how I wanted to be perceived; a ‘larger-than-life’ character, with a devil-may-care attitude, wicked sense of humour and roguish demeanour. That was the ‘mask of masculinity’ that I’d been trying to wear convincingly since my teenage years, which by now had extended to a full suit of body armour. But under the bravado lay an ocean of anxiety, where fear of rejection, abandonment, and humiliation flitted just beneath the surface, while jealousy and spite trawled the depths.

Not only did drinking and drug-taking temporarily dampen these anxieties, they also made the disguise more convincing, as they were the trappings of that chosen persona. I was convinced that if I just played the role long enough then I would become it. Neurotic Dr. Frankenstein could stay holed up safely in his castle, while his monster, impervious, ran amok. I would finally be invulnerable, and surely that was the ultimate goal of ‘project masculinity’? It was certainly the manifestation I pursued. On the outside I’d appear strong, successful and popular, while on the inside I could remain anxious, uncertain and isolated. I even learned to project a kind of fake sensitivity and emulate emotion without having to deal with the troublesome unpredictability of actual feelings. There was a secret smugness too; I’d figured out this whole ‘life game’ while everyone else was on a hiding to nothing. I continued to believe this, despite the fact that everything I experienced actually pointed to the contrary.

In order to alleviate vulnerability and shield my hidden weak points, I minimised contact with anyone that might emotionally trigger me, particularly my family. During my twenties and thirties I spoke to my Mum less and less. By my forties we only interacted 3 or 4 times a year, and my Dad, sisters, nieces and nephews didn’t fare much better. I was regularly absent from family gatherings, and would always try and spend Christmas with a partner’s family rather than my own. Partners were also kept at a distance emotionally. I became adept at being in a relationship without ever really revealing my true feelings or self. The story was the same for the friends I had and the social circles I moved in.

Somehow I remained entirely invested in this approach, despite becoming increasingly erratic, unstable, and anxious. When things got too much for me and I unravelled, I never questioned whether there was a flaw in how I was conducting and constructing my life. In fact, I only resolved to do to Hoffman because I was struggling to regroup myself and carry on as before after the most recent unravelling. At that point I hadn’t even got as far as recognising that there was a connection between the armour I hid behind and the pain I was in. In my mind the armour was there to protect me, it couldn’t be thing that was actually hurting me. 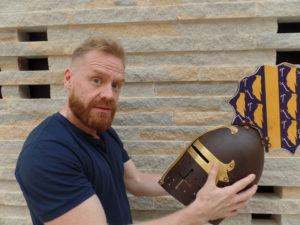 Hoffman changed all that. It was clear from the outset that my armour had no purpose or function in this new environment, and before the first day was over, much of it had dropped off. But I didn’t feel vulnerable or ashamed. Instead, I felt a sense of complete acceptance from the other participants and the facilitators. I wasn’t being exposed, I was being liberated. The most succinct way I can explain it is that I realised a life without vulnerability is a life without intimacy. One cannot be achieved without the other. By the end of the Process, the whole suit of armour had been shed, smashed and cast into the fire. I would not be wearing it again.

After Hoffman, going back to my life felt like a daunting prospect. While I may have shed my suit of toxic armour, how would I fare in an arena peopled by other would-be iron men and women grinding their axes? However, I soon learnt another important lesson. Wearing a mask drastically narrows your field of vision. Now I’d taken it off I could see clearly and saw that there were many people in my life that were compassionate, open, accepting and receptive. In the months that followed Hoffman I re-established many of those friendships, as well as my relationship with my family. This has led to joyous moments, deep connections, uncontrollable laughter and many marvellous adventures, which I now allow myself to experience fully – without the need to hide behind a mask.