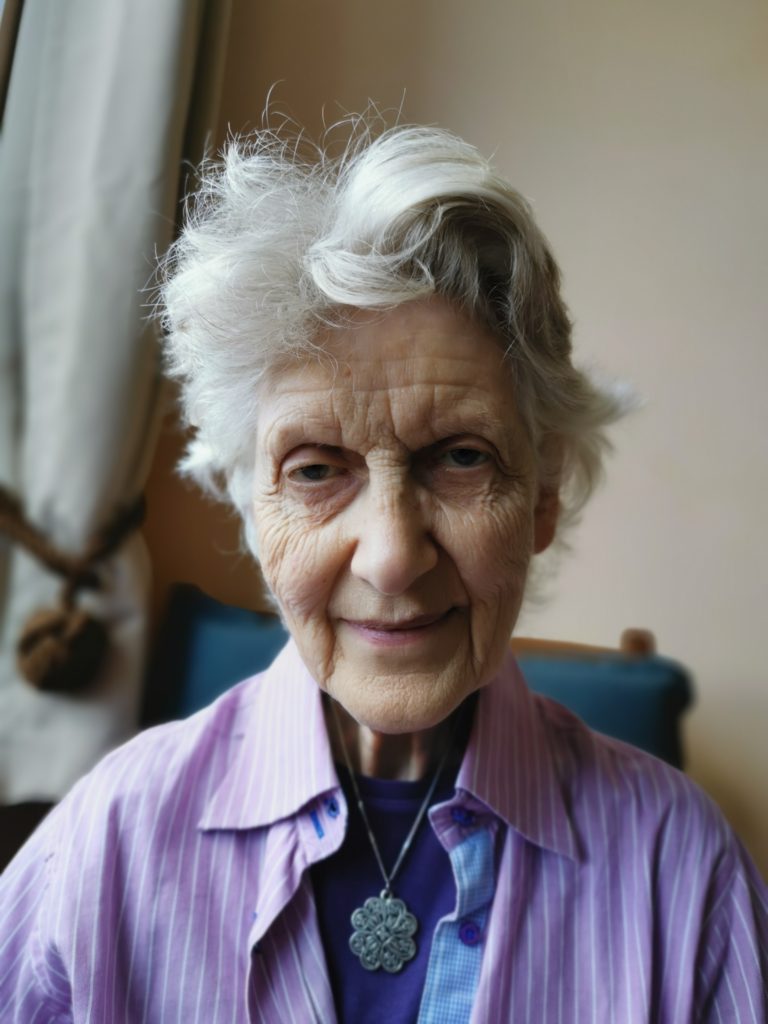 I was born into a very traditional Catholic family, my ancestors having died for the faith. I arrived in this world in London in 1939, ten days after war was declared. My very young mother already had my 20-month-old brother to look after. London wasn’t considered safe, so after two months we children were sent, in the care of our very strict nanny, to stay with our grandfather in Yorkshire.

The regime was rigid and grandfather was deaf, so he shouted a lot. It all seemed very frightening to a small child. By January 1942 another brother had been born, so we came back to London. We knew about the Germans but they were never talked about. I had nightmares most nights about Germans chasing me to the edge of a cliff.

One day I was put in our air raid shelter while they went to get Nanny and my brother. I was terrified they would all be killed and I’d be abandoned. On another occasion, when I was three or four years old, this man in uniform arrived at the front door. I was terrified, as I knew Germans wore uniform – it was my father. I don’t remember him kissing me or picking me up.

At ten years old I went to a Catholic boarding school and discovered overwhelming feelings of homesickness. By this time, I’d learnt that life was easier if I conformed to what authority figures told me to do: follow the rules, be kind and helpful to everyone, be selfless and that’s the way to heaven.

I was mildly dyslexic so I was considered stupid. When I went to the ‘finishing school’ attached to the convent, I did very well, having helped my mother all my life. From then on I was labelled ‘practical’.

At seventeen I entered the convent and began my nun’s training. I’d decided I wanted to lead a worthwhile life and in the Catholic tradition that meant giving your life to God. I thought that, by belonging to something bigger than me, I’d be able to make a contribution. I also thought that living in a community of women who had dedicated their lives to God would be fulfilling. I imagined a life of dedication and sharing would be of value.

Oh, how wrong I was.

My family lived two miles from the convent so, in the holidays, they would come to Benediction. My brothers (I had five by now) would serve at the altar and I could feel my parents behind me but I wasn’t allowed to see them – not even for five minutes. As novices we went for daily walks and from one route I could see the woods of my home, but not go there – it was absolute torture. 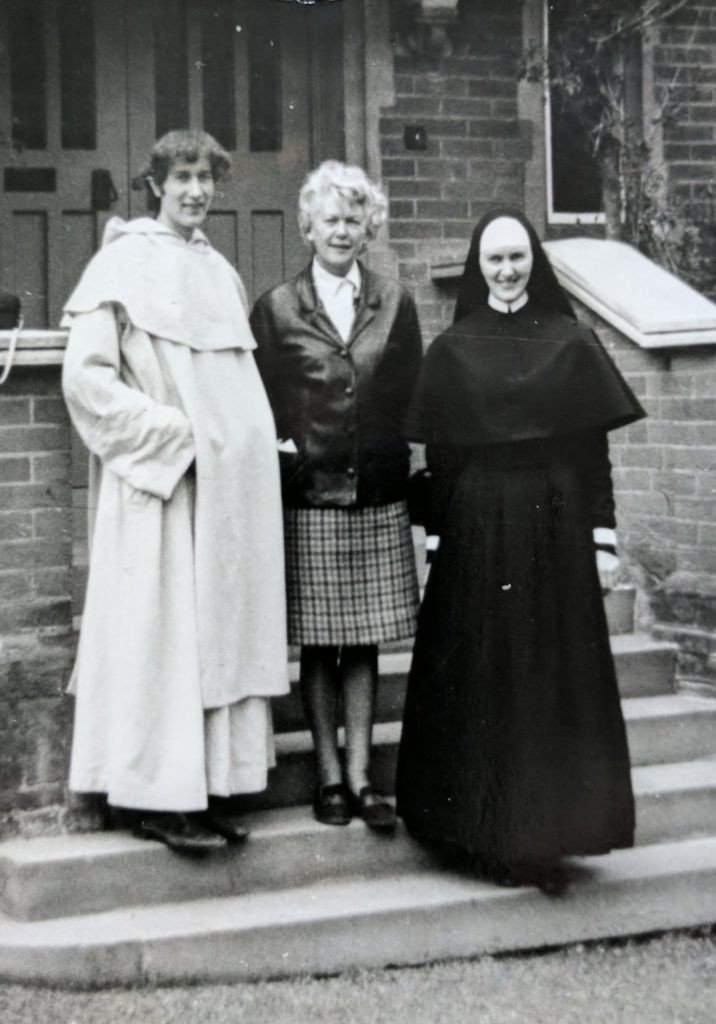 The training was pre-Vatican II and very rigid. There was no theology, no discussions, no explanations. My mind died. I was told that the voice of the superior is ‘the voice of God’ and I became God’s best conformist. Before being ‘clothed’ in the habit of the novice, Mistress cut off my hair while saying the Magnificat – my soul was not magnifying the Lord! Then began the strict training regime.

I already had several minor health problems and no medicine helped. They were not understood and continued throughout my religious life. At this time I was given what could be called instruments of torture, a discipline (knotted rope) to whip myself with and a kind of spiky chain mail to hook round my arm. This was meant to bring the body into submission, so as to free the spirit. I did this every Friday for 10 years – it didn’t work, so I presumed I was bad.

After twenty-five years of enormous effort and struggle I broke down. One evening just before Christmas I drove a nun to the station, pecked her on the cheek and was making my way back to the car when I saw the moon shining on the railway line. It seemed such a good idea that, if I was gone, someone else could do my job properly, as I was too exhausted – hardly able to get to the end of each day. However, I drove back, hung the car keys in the cupboard and went into silent supper. I looked round those good nuns’ faces and knew there was no one I could talk to.

A week later, after supper, I bumped into a therapist, not knowing either that she was one, nor what a therapist was. I found myself saying: ‘I think I need to talk to you’. I was shocked – after all you did not get help from lay people!

The following Wednesday morning I met her in the priest’s flat where she stayed overnight to teach the sixth form Sociology. I knew immediately she had what I needed. So began my therapeutic journey. It was a hard road with many rocky paths to traverse, but with her encouragement and support I obtained two years of ‘exclaustration’ to get some education.

I went first to Liverpool and then to London, and from London I left the convent. My parents were devastated. I was breaking my vows to God, so whatever I did could not be God’s will. They weren’t able to talk about the pain I caused them and so it continued.

The adaptation to ‘ordinary life’ was frightening. I remember standing in Battersea Rise in London thinking ‘who’s going to buy my toothpaste? Mary Jo, no one is going to buy your toothpaste’. Having no qualifications, the only way I could think to earn money was cleaning and ironing which I did for about five years.

I was 43 years old when I left and still not very well. I knew I needed help and received Jungian analysis for ten years. I loved the material and was introduced to another world, but I got stuck. Then I thought my body was the problem, so I did ‘body work’ for ten years. It was interesting and helped me a little but eventually my therapist retired.

I knew I hadn’t touched the depth of things. By this time I’d set up my own work, called ‘coping with change’. This evolved out of my being so bad at it when I left the convent that I had to learn about it. Then I wondered if there were others who found it difficult too. I discovered I had a deep love of people and a longing for them to make the best of themselves.

I was still aware that I needed help but what kind I knew not, then someone mentioned EMDR (Eye Movement Desensitisation and Reprocessing), which I hadn’t heard of before. I went for my assessment, which suggested I had a few difficult issues!

EMDR introduced me to the concept of trauma. I’d thought trauma was only for those who had experienced terrible things at war. I slowly began to understand the depth of some of my ‘difficulties’. It was in this context that Hoffman was mentioned.

The thought of being able to go deeply into things and find a way forward, dealing with them in a safe environment where I didn’t have to gather myself together at the end of a therapeutic hour, felt so desirable. I’d unexpectedly inherited a small sum of money and decided to invest it in myself. I booked on the Process. 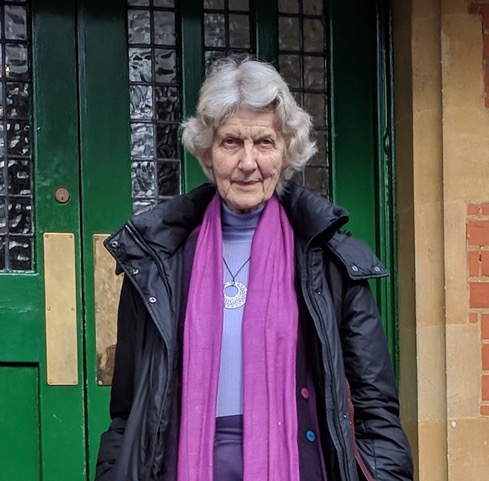 At the convent, 63 years later.

I did the pre-course work and was both relieved and full of anticipation, when I was accepted. I arrived the evening before at this beautiful place and met a man who immediately asked me how old I was. I said 78 and he replied he was relieved not to be the oldest at 65!

I’ll never forget walking into that room the first morning and looking round at what seemed to me to be beautiful young people. Had I made a terrible mistake? However, here I was and I was determined to make the best of it and to be engaged in a very well-structured process in an extremely safe space. Facilitators kept a watchful eye on us.

We were invited to take part in very practical and insightful exercises to help us get in touch with deeply ingrained patterns, both inherited and acquired. We were encouraged to confront the negative effect these had had on our quality of life. We were directed and supported in writing responses to key questions. There were also powerful rituals to enable us to lay some ghosts to rest. Staying with our ‘stuff’, often in silence, was an important part of the process. At times we all fell apart and felt equally young and vulnerable.

Celebrations were part of it too, so the child within us had a chance to play. I sometimes found fully expressing emotions challenging, as it was so contrary to my upbringing and convent training, but these brief moments of freedom gave me a taste of something beautiful. Being surrounded by others, all engaged in their own difficult struggle, was both helpful and supportive.

So, how has Hoffman changed me? I now live with much deeper awareness and insight as to my patterns, both positive and negative. I’m more able to stop myself falling back into destructive ways of being, though I still need to catch myself. I now live more freely and with a greater depth of feeling. At this stage of my life, though I can look at younger people and envy the years they have ahead, I’m sure it’s never too late to live with greater insight. I still check my course notes, especially if I meet a block.

There are very good follow-up opportunities to dip in and out of, to refresh oneself. To meet fellow travellers was such a precious, supportive and encouraging experience. I remain profoundly grateful to my group who accepted me, regardless of age. I believe going with an open mind, heart and soul ready to give oneself fully to the Process can be life-changing and is ageless.

For more about May Jo’s Coping with Change process, email: maryjoradcliffe@icloud.com

Surrogates under the spotlight 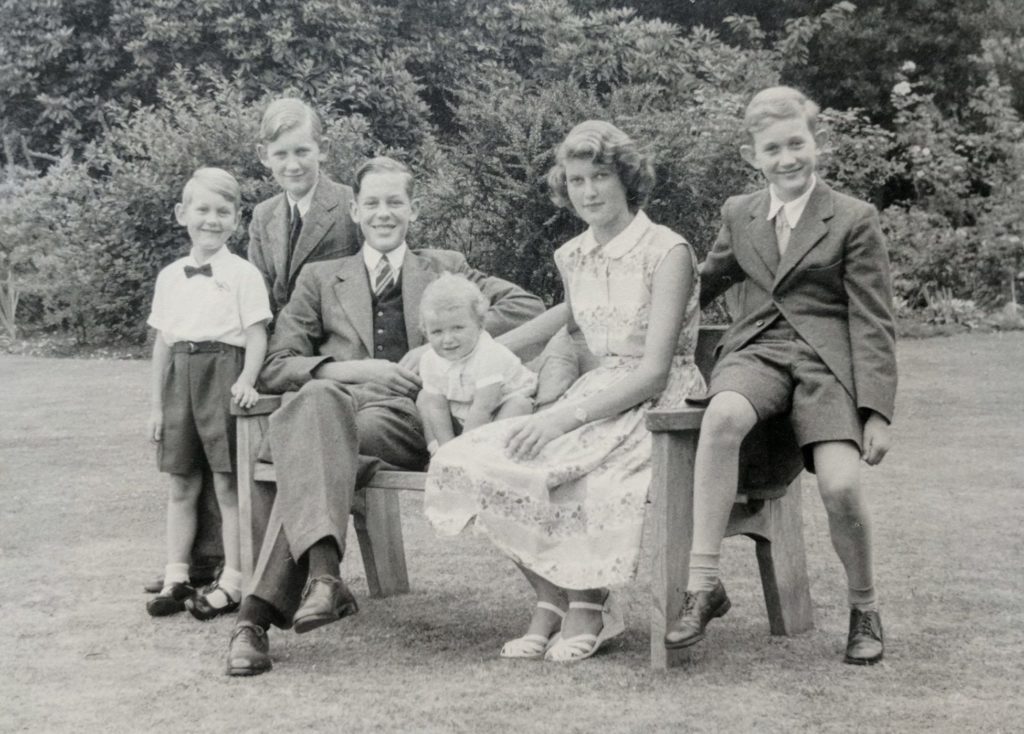 When we do the Hoffman Process, we examine our automatic behaviour patterns, the negative thoughts and feelings we get stuck in time and again. These have their roots in our childhood.

From the pre-course work onward, we look back to our formative years, when we unconsciously imitated, adapted to, or rebelled against the negative patterns that we encountered in those responsible for taking care of us.

We’re invited to consider the long-term effect of anyone or anything else that played a significant role too. In our Process work, we call these ‘surrogates.’

Someone who played a parental role as we were growing up can be important: maybe an older sibling, a grandparent, a nanny or childminder. If we went to boarding school, spent time in a care home, religious or military community, or even in a culture affected by war, we’ll look at how these may have shaped us.

There’s also the space to look at the effect of parents being absent for whatever reason, be that death, illness, working remotely, adoption, addiction or neglect.

We thank Mary Jo for so openly sharing her story of a complex childhood shaped by surrogates – and for sharing the important message that it’s never too late to change.