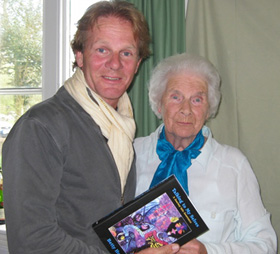 In 1998 Betty did one of the earliest UK Processes and has been one of its greatest supporters ever since. Whenever someone asks if it’s too late to do the Process because they’re ‘too old to change’ Betty’s bright blue eyes and radiant smile come to mind. Twelve years after she did the Process, at the age of 90, Betty published her first book Talking to My Selves; A Journey into Awareness. It describes a life full of tenacity, suffering and, ultimately, the triumph of the human spirit. Winning five star reviews on Amazon her book continues to reach out in support of others who have struggled with the legacy of a difficult childhood; one which included the multifaceted consequences of early sexual abuse. For someone who once found life meaningless, Betty has given her life more meaning than most!

‘I did the Process in 1998 when I was 78 and I’m now 95! What stands out for me when I look back? The Process is distinctive in a variety of ways, because people seem to find it equally valuable whether they’re totally new to personal growth or whether they’ve been journeying the path for some time.

When participants are invited to sum up their experience of the Process at the final closure session, the range of reactions is spellbinding. Some individuals find it a ‘Damascus Road’ event because such remarkable changes have taken place; their way of being themselves in the world has changed so radically. Others experience a less dramatic outcome but I defy anyone to come away exactly the same person they were when they arrived.

I chose to do the Process at a stage in my life when I’d worked with many therapists and experimented with many different personal growth models. A major development during this extensive, intriguing venture into my underworld, was the surprise recovery of my creativity. At 73 (with the help of a niece who is a photojournalist) I found that the little person who had felt so completely inept at school could actually put words together and write effectively! In quick succession I became skilful with a range of Nikon cameras and lenses, mastered the stubborn moods of a PC with editing software, had illustrated articles published and made my own wildlife movies.

It was while I was revelling in this exciting, creative phase that I faced the fact that I was suffering from a dissociative disorder. Repeatedly, over a period of about 30 years, I became trapped in the ‘start/stop’ task of writing an account of my life entitled: Talking to My Selves – a journey into awareness. Time after time I became blocked and threw the manuscript into a drawer. Disheartenment, darkness and despair would follow. I recall the exact moment when I first read about Hoffman. My attention was riveted by this article about the Process. An enlightened ‘self’ jumped up and said, “That’s what we’ve got to do”.

The course proved to be absorbing, illuminating, and challenging. It was exactly what I needed at this pivotal stage. What intrigued me right from the start was the way in which all my ‘Selves’ found their own space. The Process was an adventure – there was a surprise around every corner; you didn’t know what the next development would be. This gave a spicy sense of excitement to every day.

The diverse ways in which the group interacted revealed family traits to perfection. Some aspect of a person’s expression or behaviour would suddenly spark a recognition of hidden secrets or deeply buried patterns – intricate entanglements which could then be explored in depth. There was always space to follow up and delve into traits which replicated vital aspects of family dynamics when we were young. Tim Laurence was supervising my group. I dared to be a rebellious child – revelling in challenging authority was a rare, zestful adventure! 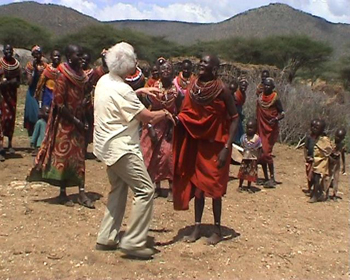 I’d already explored my family constellation quite extensively. As a child I’d lived in two completely different compartments. Indoors, my life was structured and totally controlled by my mother. Outdoors, another child lived the life of an escapee: a feisty little person who took every opportunity of being outside on the farm with my father.

I was delighted to unearth a family print where I’m a babe in arms. My mother’s holding my sister Helen’s hand and my father’s looking directly at me.

The unique format of the Process gave me a fresh perspective on these early years: it added an innovative dimension to the profound significance of religious indoctrination. My mother always referred to Jesus as ‘her Lord‘. There was an inflexible, deep-rooted, day to day familiarity in this relationship which made my mother’s Lord a member of my family. He was ever present: at every meal, in every conversation. Everything revolved around this intimate bond and the authoritarian structures which controlled my mother’s life.

So it was ’Mother and her Lord’ and my Father – a triangular grouping which left me no option but to compartmentalise my relationship to them both. I can still catch the profoundly puzzled look on the face of a child’s enlightened self as she pondered the eternal question during a therapy session, ”If Mother is married to her Lord then who is my Father?”

Another revelation on the Process which was highlighted by its unique structure, was the sheer depth at which I’d been enfolded – as if by the tentacles of an octopus – in shame. As a result of early traumas, intensified by the all-embracing strictures of religious indoctrination, shame had me locked in its grip from the beginning of time. There is something awesome about the power shame has to mould a child’s view of herself and her world. The unique progression of enactments, surprises, and interactions which unfolded during the Hoffman experience gave me a new sense of freedom from this enslavement. 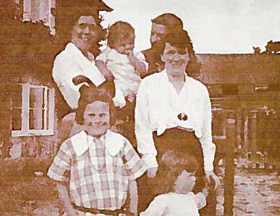 Each person there was respected, supported and nurtured, child selves were welcomed, honoured, accepted and allowed freedom of expression. Because of my history, the word ‘love’ was deeply contaminated and distorted both as a verbal expression or as a manifestation of true affection and caring. It was this total acceptance of me, in my many parts, that made the most lasting impression upon me.

Spirituality was an essential ingredient. The terminology was extremely confusing to my profoundly indoctrinated selves but this mystification was counteracted by the sense of fun which appeared out of nowhere – suddenly, unpredictably. There was so much fun – a vitally nurturing building block which had been inadequate during my childhood. As a result of this experience I found that I could dance without feeling inhibited.

The quality of the whole Process experience gave me a sense of being generously loved, affirmed and sent on my way with a bounce in my step.

Have I now retired?

I think that life is about ‘becoming’ – slowly becoming the person we have the potential to be. Rather than approaching death – the mystery of ending this phase of our existence – I’ve discovered that getting old can be more about connecting to the springs of life. In order to survive, I split into very separate compartments. Now at 95, although the old bones creak, some selves have mellowed, matured and learned to be flexible and negotiate. Other parts have found their niche for the first time and are connected to living in the present. Most of all there’s a rich sense of togetherness on this continuing journey of discovery.’

‘Betty is one of the most playful, young-spirited people that I have had the joy to meet.’ Tim Laurence, founder of Hoffman UK and Co-Director of Hoffman International

‘Thank you Betty for sharing with us the reader, your vulnerability and wisdom.’ Amazon

‘A must-read book, beautifully written. I couldn’t put it down.’ Amazon

Betty now lives in Sussex where the panoramic view of her life is mirrored by a panaromic view of the sea. Read her fascinating and insightful story and understand more about disassociation at: www.primallaugh.com