Give Yourself Permission to Live Your Life: Priya Rana Kapoor 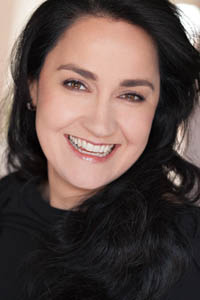 How often do you do something for the sheer joy of doing it? Never mind if it achieves anything or has a point to it – it’s just glorious fun. For Priya Kapoor guilt-free fun was a distant memory until she did the Hoffman Process in 2009. With a Master’s degree in counselling psychology, and after working for years as a therapist, she felt that Hoffman was very much a ‘last ditch effort to save my personal life’. The gifts that she left with surprised her. Five years on she says:

‘By the end of the Process I understood and felt how supportive and loving relationships could be and most importantly the Process gave me permission to have fun! Honestly, I went around my whole life feeling guilty about doing joyous things. I always felt I had to attach some productive meaning to everything I did. I never really realised that I could just have fun for the sake of it and that would not only enrich my soul, my well-being, my motivation but also many of my relationships.

I knew how to work with clients very well and I learned the academic theory behind everything, but I’m now able to add heart, soul and spirit into my life and my work. I trust myself enough to know that I don’t have to micro-manage everything and opportunities will make themselves known. I’ve referred a few of my clients to Hoffman with great results.

I’ve recently published a self-help book, my work is so fulfilling and I’m happier than I’ve ever been. I have a greater understanding of the divine gifts in life and I’m so much more in synch with myself and what I need. I have a much more functional and supportive relationship with my family. Whereas I used to see my mother as the enemy, I now see her as a caring, smart woman with just as many foibles as I have. Most of all, I can now say that I really love her and have been able to let everything around my father go. We’re all doing the best we can, and we just need to recognize that in each other.’ 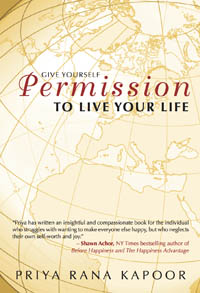 Priya’s new book Give YourSelf Permission to Live Your Life has just come out to rave reviews. It has been described as ‘insightful and compassionate’ by Shawn Achor NY Times bestselling author of Before Happiness and The Happiness Advantage and Dr Steven Berry, founder of Global Meetinghouse Enterprises comments: ‘Not since Eckhart Tolle’s New Earth has there been such a clear description and walk-through of a healthy sense of self.’ Here’s an extract which gives a taste of Priya’s warm-hearted and inspirational style.

‘Many people are in careers and lives they feel they never completely chose for themselves. Suddenly, they see that many of the decisions they’ve made over the years were done in an effort to fit in or gain approval. Some made choices based upon what they believed their parents or society had told them were appropriate or worthy.

Somewhere along the line, they stopped following their own hearts. One decision led to another, and they lost track of the hopes and dreams they had in early adulthood. They thought that by putting themselves first they were acting selfishly. They hoped that by conforming they were making the right decisions – maybe the easier ones. However, somewhere deep down, they now battle with the insidious feeling that they are not as happy or fulfilled as they could be. They are in a place where they no longer even give themselves permission to think about what they might want to do or be.

What Does Give YourSelf Permission Mean?

The word permission is used a lot in the self-help and personal development industry, in product- and service-driven businesses, in politics – really, all over the place – but what does it mean? I use the concept of giving yourself permission to describe what happens when you decide and allow yourself to do what is best for you, whether that is saying no to a needy friend, taking care of your immediate needs so you can be more present with your relationships, or sometimes even allowing yourself to think about what you might want to do with your life.

A huge number of personal development books and programs are successful at giving you tools to empower yourself on the outside. They often encourage people to attempt quite daring feats such as bungee jumping or climbing some very high mountain. All of this is part of a process of goal setting and action planning, and the idea is for people to make very ambitious goals and then work hard to realise them.

It’s all valid work, but I’d argue that for many people, something else has to happen first. Long before they reach the stage of even being able to vocalise their long-term goals, many people need to build firm foundations of confidence and self-worth that will enable them to take the reins of personal responsibility and give themselves permission to start looking at what they want for their lives. They need to learn how to give themselves permission to make small advances before they’re able to make great strides.

Those tentative steps forward are often the hardest steps of all to take but are the ones that elicit the most satisfaction when achieved and which lead to greater long-term sustainability of new habits and behaviour. Far from being selfish, people also become better friends, partners, sons, daughters, siblings and co-workers.

In modern society, we usually think of permission in terms of someone else granting us the authority to do something. A passport allows us to get on a plane and enter another country, and a driving license lets us take to the roads. However, it’s now time for you to give yourself that passport which will grant you the permission to travel to places unknown, the license to take care of yourself, and the liberty to be creative and free……

Visit Priya’s coaching website and order her book at: prkcoaching.com