Dances With My Inner Critic: By Spontaneity Consultant Steve Chapman

“Oh dear! I don’t know why you are bothering to read this piece. I’m sure that if you quickly move on you will find a plethora of other articles that are much, much better and written by appropriately qualified people who really know what they are talking about. This article is rather pathetic by comparison. It is written by somebody who lives under the delusion of being able to write something for a publication as prestigious as this one – just one of many ridiculous imagined talents that they possess. I have been telling him for years that these silly ideas are only going to lead to his spectacular public humiliation and he’d be better to play it safe, get a normal job where he won’t get found out as an under-qualified imposter! I can only apologise on his behalf and suggest you don’t read any further than the end of this sentence.” 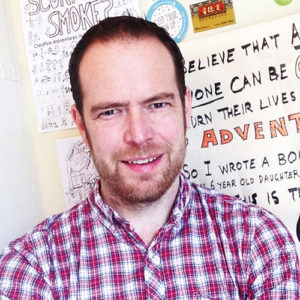 Meet my Inner Critic. My dark side. That voice who tells me I’m not good enough. Nowadays I quite enjoy letting him write the opening paragraph. It lures him out into the light, makes him less of a shameful secret of mine and, rather bizarrely, seems to diminish his power a little. I have to admit that I also get some personal satisfaction from all of this as I don’t think he likes me doing it one bit! One of my fondest memories of childhood was when I was at primary school. I was a keen artist and my very active imagination helped me come up with all sorts of characters and stories. My favourite was Yappy Dog. A friendly little creature who would have all sorts of adventures. My teachers also loved him and invited me to write stories to read to the younger children who adored him and would sit cross-legged listening to his latest antics. Sadly, Yappy Dog seemed to die shortly after this. I started ‘big school’ and there was no time for doodling. Even if I did, it seemed that nobody else at school was interested in these stories that would now be considered a bit childish. My teachers and parents continually told me I needed to take my education more seriously and that I wouldn’t amount to much in life without qualifications. My school reports shamed me by telling the world that I simply didn’t try hard enough or make enough effort despite me trying my best with every ounce of my slightly dyslexic brain. At the age of 15, a careers advisor told my parents and I that ‘only the very best candidates’ could get a job in radio and I finally gave up on making a living through creativity, took the advice I had been given and got a job in a factory. My Inner Critic seemed somewhat satisfied with all of this and reminded me for the next 20 years that I should be eternally grateful that somebody as obviously unskilled as me could earn a wage. 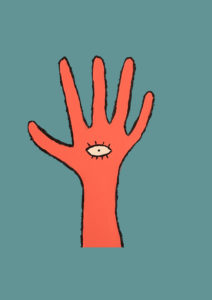 As I sit here now, aged 44, I notice how easy it is to tell this story. I also notice that I have no anger or animosity towards the characters within it. I now realise that without these and many other events earlier in life, I would not be the person I am today. I have also come to realise that each time I share my personal story with others, I become more at peace with it. The influential Gestalt psychologist Arnie Beisser suggested that human change is paradoxical and that we get more change by becoming more aware of who we already are, rather than striving to be something we’re not. There is a similar philosophy in Zen of surrendering to what is. I have taken these philosophies to heart as part of my ongoing self-development and have rediscovered my love of art and creativity as a means of making sense of who I am. Through drawing and painting I have found that I am able to get in touch with deeper parts of my personality and express it in ways that words alone could not achieve. Through tactile methods such as clay, movement and mask making I have learnt to dance with my Inner Critic rather than fight it, getting to know it in a kind and compassionate way that seems to take some of its power away. And, like the fine bristles of an archaeological brush, the immersive experiences of the Hoffman Process allowed me to sweep away many layers of thick dust that were obscuring the deeper levels of my own self-awareness.

I had no particular objective when I signed up for Hoffman, other than I wanted to discover more about the origins of my own inhibiting self doubt. I went into the Process blaming school for my lack of self-confidence and, whilst it certainly played a role in it all, I was surprised to learn that the seeds of self-doubt were sown much earlier in life and much closer to home. Even though I had kind and generous parents who did their very best to encourage me as a child, I began to realise that the heart of my Inner Critic was made up of a collage of my experiences of them that I’d either copied, modified or rebelled against. The process offered me a number of different invitations to make sense and make peace with these memories – some creative, some cathartic, some rather bizarre. I have come to believe that creativity is simply our human capacity to experience and express difference in service of change and transformation. Many of us lost touch with our naturally imaginative and playful selves some time in the past but, with a little bravery and support, we can all begin to reclaim and nurture our own natural creative abilities through gently letting go of fixed self-images about who we should be and become more deeply aware of what we already are.

Steve’s mission is to be playful with not knowing. He is a speaker, writer, consultant and artist who specialises in exploring creativity and the human condition. In 2014 he published his first book “Can Scorpions Smoke? Creative Adventures in the Corporate World. His 10-year-old daughter is his mentor and Chief of Imagination. You can find out more about Steve at www.stevechapman.org

Steve is featured in the 2018 issue of Hoffman magazine. To order a FREE copy for yourself, friends or family, click here.