Jeremy is a Supervising Hoffman teacher based in Ireland. Although English by birth, he has many bonds with Ireland which began when he went to Trinity College Dublin as a student. In 1978 his love of travel led him to Australia where he had a son Mischa, who still lives there. After spending the last year in Australia, Jeremy and Lynda, his Irish partner, are now back in Ireland. However, he still plans to spend some time down under every year. His passport is always close to hand!

I was a shy child who lacked confidence. As I grew up I tried different techniques, group work and courses to help me feel comfortable around others and to open up, as well as meditation and 1:1 therapy. Each time it was a case of three steps forward, two steps back. By 1989 I was still not in a particularly happy relationship or a fulfilling job and I knew that I needed something bigger and more intense than I’d tried before. It was at this point my friends recommended the Hoffman Process, which I did in Byron Bay, a beautiful beachside town in New South Wales.

The Process wasn’t a ‘magic bullet’, but it allowed a great deal that had been stirred up in therapy to be clarified and resolved. The greatest gift that it gave me was that of self-empowerment. I realised that blaming others when things didn’t turn out the way I wanted was an avoidance pattern I’d developed in my childhood. Once I was aware of this, I understood that I alone was responsible for my life which meant that real change was possible – my future lay in my own hands and that was exciting. The course also profoundly changed my relationship with my parents, enabling me to love them and receive love from them in a way that I hadn’t been able to before. This had a wonderful knock-on effect on all my relationships.

I’d already been working with people in a number of ways, including unemployed young people and as a counsellor before doing the Process, so it wasn’t long before the desire to help others prompted me to apply to train as a Hoffman teacher. The training was very challenging but also exciting and fulfilling. Bob Hoffman himself came to Australia and facilitated three of my training Processes – his mealtime interrogations were legendary. Nothing escaped his eagle eye and he expected you to have the same level of awareness at all times. By the time he presented me with my Hoffman teacher’s certificate I really felt I’d earned it! 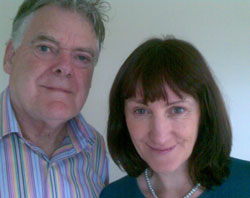 I find there is no substitute for life experience to give you empathy and compassion – two of the most important qualities for a Hoffman teacher. In fact it was in order to stock up on more of that that I took a break after four years of teaching the Process in Australia, and went to work in the public service in Canberrra. For the same reason when I moved to Ireland in 1999, where I eventually started teaching the Process again, I also took a position with a childcare support organisation. Work keeps me grounded in the everyday reality that most Process participants are dealing with.

Along the way I’ve also done a number of other courses to increase my skills that caught my interest including training as an Imago Community Educator. That encouraged me to go further into the area of communication through a course in Non-Violent Communication. I find one of the most helpful aspects of the Process is how it teaches you to own and communicate your feelings in a way that’s loving and respectful of yourself and others. I trust that Lynda and my family, friends and colleagues would agree that my communication has benefitted!

The Process across different cultures

Over the many years that I’ve been involved with the Process I’ve taught in the UK, Australia and Ireland as well as one Process in Canada, as teachers are encouraged to broaden their cross-cultural experience. I can see how the course changes emphasis to adapt to childhood experiences in different countries. Although the core parts of the Process are the same all over the world, I think it’s a good idea to do the Process in the country where you experienced your childhood, if you can. For example there is a significant difference between the predominantly Anglo-Saxon culture of the UK and the Celtic culture of Ireland. Teaching on a Process in Ireland and on one in the UK are markedly different experiences.

Since coming back to teaching in 2003 I’ve also noticed how much the Process has evolved over the years, and continues to do so. The fact that it’s regularly updated means that it reflects cultural and social shifts in attitudes to self-development. We also give more time towards the end of the course to help people ground, to integrate their new insights and responses and to feel comfortable going back into their old lives with their new awareness.

Another thing I’ve noticed is that more people come to the Process having done some therapy beforehand. It’s certainly not a requirement but it’s perhaps an indication that people are prioritising their self-development and personal happiness more than they used to. If there’s a common pattern that motivates people I’d say that, although we might realise that we aren’t happy or fulfilled, it usually takes a specific event to move us into action, coupled with a belief that change can happen. Although we all come to the Process with different issues, the attitude that unites us on the course is: ‘change is possible and I want to do something to allow change to happen‘

Click for more information on Hoffman events in Ireland