After years searching for a relationship that worked, award-winning International Family Lawyer Ayesha Vardag did the Hoffman Process. Transforming the relationship she had with herself reaped wonderful rewards which rippled out to those around her. Her Process ‘toolkit’ allowed her to vision a joyful new partnership as well as a thriving and fulfilling future for her family and her business. One of these was particularly key…

‘I recently posted a photo on Facebook entitled, ‘My family, Machu Picchu’. In the background stand the emerald peaks and terraces and the gleaming white stones of the sacred Inca city, in the foreground are my husband, myself and our five combined children. 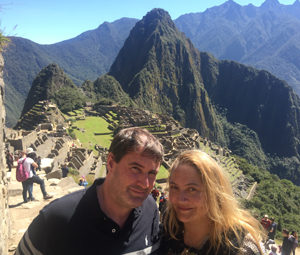 I looked at that photograph and felt a sudden frisson. It resonated so strongly of something that I’d experienced at the Hoffman Process, 8 years before.

In the background to that decision lay a heartbreaking divorce and a string of failed long-term relationships. Finally I thought I had at last settled down to make a life with a man I had truly trusted and believed I was very close to. Sadly, after he’d assured me of his commitment and moved my children and me, schools and all, to be near him, I learned he was running a double game with another woman. She had a multimillion divorce claim in train, pressed upon him by his financially reduced aristocratic family, and ultimately he chose her.

Fast forward to my arrival at Hoffman in Sussex in late summer 2008, determined to dig deep.

On the Process, I worked through my parental issues, not least the impact of my father’s lifelong absence and the sense of rejection that had engendered in me. This played out in choosing man after glamorous and unloving man, all hard-wired to end up rejecting me again in some way.

But what affected me most powerfully and profoundly, were the visualisations. One that particularly caught my attention was the classic elevator exercise. You pose a question, then visualise an elevator taking you down, down, into the depths. As you open the door and step out you go with the flow of what comes into your consciousness. 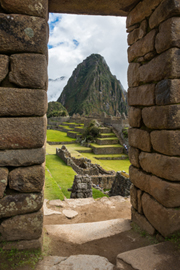 I pushed the button in my carefully visualised Art Deco, wrought iron elevator marked with my consuming question: what is stopping me from having a lasting relationship? I descended and when the door opened, I stepped out into a very grand restaurant – very formal, but very sterile. There were damask tablecloths and silver cutlery, the style was black and white and minimalist, the waiters were haughty, the flowers were made of glass and the atmosphere was cold. Across the way, sitting on his own, reading the paper, was the chap who had just left me.

I walked past him through the restaurant, leaving him behind. I stepped through the back door into a dark, frightening, dirty alley, then kept walking, through a wasteland, then rocks and rough ground. Eventually I started up a mountain which became greener and more fertile as I climbed, until at last, on the summit, I met a man, a big, tall, warm, bear of a man, with two small children beside him. Suddenly my children were there too. We embraced and everything felt safe and good again.

That was what awaited me on top of Machu Picchu. After years post Hoffman working through bitty, unsuitable relationships in the wild, I met my partner. I chose him: a warm, loving, very decent man who loved and was genuinely committed to me for myself. He was a different type from the men I’d been attracted to before. Those were relationships in which the childhood patterns of rejection and pain had played out one way or another.

With this new man we united our children, lived together through arduous and rocky times, then married two years ago. That photograph that I’d posted on Facebook was taken after my children and I had ridden horses for days through a barren mountain pass to reach Machu Picchu and meet him there. Looking at the seven of us together, happy and loving each other, made me realise that my visualisation had, in fact, come to pass. 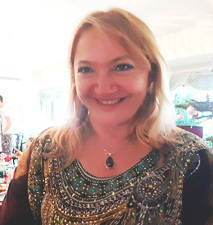 This was the second time this had happened. While at Hoffman I was also asked to visualise where I should like to be in five years. I conjured up an image of a long, wooden table, with a huge window overlooking the sea from high above. All my children were around the table, an intellectual, arts-disposed husband sat at the end and his children intermingled with mine. We were all chatting, reading the paper and exchanging jokes and ideas. Last Christmas, in our apartment in Dubai, I had the sudden flash that what I was seeing before me was exactly what I had visualised.

The same happened with my law firm, Vardags. At the time I went to Hoffman it was distinguished but small. In my five year visualisation I saw it as the leading family law firm in England and Wales.

After I left the Process I kept pushing it to the next level, and the next, refusing to stand still. Now Vardags has the biggest presence in the high net worth divorce field and is extending into other areas such as corporate and crime. It’s the only law firm on the Sunday Times Virgin Fast Track 100 list (as the 46th fastest growing company in the UK). I’ve even been voted NatWest Everywoman Woman of the Year for changing the legal landscape. So that vision, too, came to pass.

I cannot over-emphasise how important that visualisation process has been for me. Of course it’s nothing supernatural – it’s as simple as defining your goals clearly, then allowing the myriad of unconscious and conscious choices you make every day take you towards them. Sooner or later, like magic, you realise you’re exactly where you wanted to be.

Hoffman is about positive change – about clearing the decks then getting the tools to make a good life for yourself and those around you. I have tried, with the power, responsibility and confidence my firm and my family has given me, to create positive change for those in my world.

I’ve set up flexible working for parents and we pay for their children to be at top nurseries, described by Vanessa Feltz as ‘a Rolls Royce package’, so they don’t have to wait to have children or choose between family and career. We also fund a graduate training scheme to combat economic inequality, so the most talented aspiring lawyers can get their qualifications while working with and being financed by us. These things have made me and others very happy, as well as making sound business sense.

I think the most terrifying thing after a relationship breaks down is the sense that you will never be happy again, that all joy is gone from your life. An unknown future stretches out in front of you characterised only by the bleakness and unhappiness that you feel in the present. What Hoffman did was give me back my capacity to dream, to plan for happiness and to make my dreams come true.’