Back From the Edge: with Wilma Mae Basta 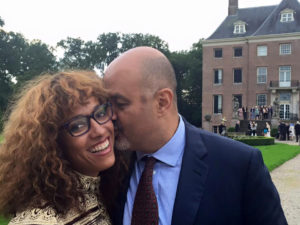 I’m well into my second marriage, and I’d say it’s one of the most challenging and rewarding accomplishments of my life. I say ‘accomplishment’ because I feel I’ve achieved something – contentment, fulfilment and hope. Life is rich and I’m at peace. How my husband Victor and I got to this place has been a marvel to those close to us. By rights, we shouldn’t have made it. Family and friends were emotionally preparing for our impending divorce only a few short years ago.

In hindsight, we can see how we travelled a path riddled with emotional potholes. But back then it felt as if we were caught in a typhoon in a box.  Blind in a storm.

Let me back up and give you a short introduction to the both of us. My name is Wilma Mae. I’m an American who’s been living in London since my early 20s. I came over here in 1989 to study for a semester and ended up staying 26 years! I married a wonderful man and had two beautiful children. He was a banker and I eventually went to work in PR. On paper, our life was magnificent: two houses, kids in private school, a nanny, successful careers and friends. We had it made in the shade. Ha! Sadly we didn’t.

We were growing apart and yet we still loved each other.  And while we communicated lovingly with each other and rarely fought, we weren’t communicating honestly. Couples therapists were a waste of time. No one seemed to be able to help us understand what this marriage thing was all about. There was something mysterious and esoteric about the concept of a life union. It was something that I grew up expecting to do but I didn’t know what it was really supposed to be. The same went for motherhood.  No instructions, no answers, no nothing. That was fine I guess. I’m good at winging things. I figured it would all sort itself out and we’d intuit what needed to be done because we had a lot of love to give and were essentially good people. Wrong! 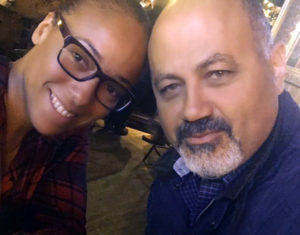 What does marriage mean?

I had almost zero understanding of what marriage was, and not a lot of understanding of who I was. So, unsurprisingly, the marriage failed. The divorce was fairly amicable but still incredibly painful to all of us, including the children. My successful life on paper was now a mess. I was emotionally all over the place and had no real guiding force. I knew I needed help, but not even friends could advise me. I felt that no one really ‘got’ me. So I just winged it yet again and made poor choices in partners for the next couple of years.

Victor, who’s Egyptian born but grew up in America, moved to Britain at the same time as me in 1989. We met in December 2004 through internet dating. Initially I didn’t want to date someone who was separated and who might go back to his wife. It sounded messy and had the potential for unnecessary drama. But I took the leap nonetheless. Again, I figured I could wing it and I could withstand the drama. Yet again, I was wrong. 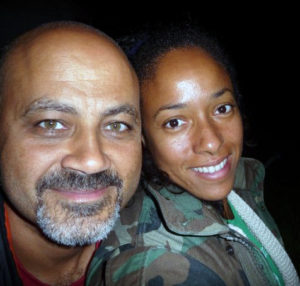 Within two years, Victor proposed. We moved out of London to the countryside and bought a big old house with a lot of land. His divorce wasn’t amicable and sadly the kids were caught in the middle of it. They were understandably angry and often took it out on Victor and myself. Most times there was no buffer and I was in the firing line. It began to take its toll. I started drinking more and we had more arguments. I reacted badly to his children when they acted out and my own children, who idolised his kids, began to dislike me. I felt trapped in a downward spiral.

Finally one of my oldest friends suggested that Victor might benefit from Hoffman.  After pleading with him for almost a year he agreed to do it (because all of the issues lay with him – NOT!) By this time, his eldest was not speaking to me and the middle child was also close to blocking me out. My kids were angry with me about a whole host of things but everyone seemed OK with Victor. He was Mr. Nice Guy. But none of them saw what I saw and I was slowly crumbling. I couldn’t understand how everyone saw me as the bad guy when I was only reacting to them behaving badly. And my husband did nothing at the time to protect and support me, so my reactions got worse.  At the time, this was how I saw things. I have a different lens now.

When Victor came back from Hoffman, he was all sunshine, love and happiness – but I still felt as if I was living in an emotional storm. I was resentful because I‘d helped to get him fixed but there was no one to fix me. I was lonely in this big ole’ house and felt very isolated and left behind. I snapped and took it out on Victor.  He was in his post-Hoffman bubble, which just enraged me even more. For no particular reason I shouted and screamed and threw things and cried. He pleaded with me to stop but I couldn’t. I’d never done anything like this before. He left the house and drove to London and I crumpled on the floor in tears. I knew I’d hit rock bottom. I didn’t know who could help me but the only thing I thought I could do at that point was to try to get on the Hoffman Process. I was ready to be open and surrender to anything.

I was fortunate enough to get on the next course. The week I spent there was the first time in my life that I felt I got to know who I really was. I learned how to take my first steps as that newly ‘uncovered’ me and create a life where I wasn’t careering from guardrail to guardrail.

Now don’t get me wrong, life wasn’t all rosy when I got out. We had a few months of wedded bliss but things still got worse a few months later. Behaviour patterns returned on both sides and I began to feel lower and lower. We went to see a woman who practices Life Alignment who was very helpful. Over time, these types of alternative therapies have proven more useful for us than traditional couples therapy. 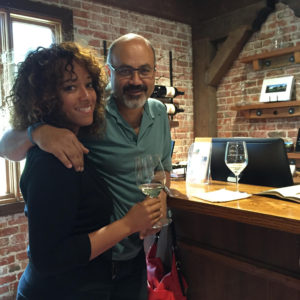 Nine months of ups and downs followed – however this time around we both had better tools and greater clarity about who we were. I stopped being reactive and focused on continuing to heal myself rather than control the situation. I meditated daily and developed an emotional strategy for healing myself – BOUNDARIES! Even though it felt as if everyone hated me, I decided to just love myself and not allow myself to be treated in any way that wasn’t based on love and respect. This included by my husband and children. As I repeated this to myself constantly over the ensuing months, I watched in wonder at how my life began to change.

Eventually, Victor and I got to a place where we recommitted to each other based on honesty and compassion. Our relationship is stronger and happier than ever and we both credit the work we did at Hoffman for putting us on the right track.

Six years on and we’re still madly in love with each other and now have the tools to build on that and also to deal with the dramas when they appear.

The main difference for me, after doing  Hoffman, is greater awareness and openness to seeing my patterns and how they affect those closest to me.  Before Hoffman, ‘pattern’ was a negative word, one I’d meet with stony silence as if readying for defence (which was the case).  Post Hoffman my starting point is fundamentally different: I am willing to listen.  My success in responding is mixed to be sure, but my preparedness to listen remains no matter what.

The other point is that I actually know ‘what good looks like’ in terms of dissolving my worst patterns. I’d say chronic disengagement was perhaps the most damaging pattern I had.  Today, I know what being really engaged feels like, and I know when I’m not.  Sometimes I self-correct, other times I respond to what Wilma or someone else points out.  But in the aftermath of Hoffman I cannot recall a single time I put up the emotional barricades when someone was pointing out a negative pattern to me.  Before Hoffman, I would be hard pressed to recall a time that I didn’t.

Thank you to Wilma Mae for sharing her story. You can read her blog for entrepreneurs here: http://wilmamae.com/