Many of us spend time unpacking our childhood baggage as an adult, as part of our journey to maturity. However, there is increasing awareness that we may not just be the sum of our childhood conditioning, we can also be influenced by ancestral memories of unresolved events which go back generations. Here is one person’s story which shows how historical events can influence current life experiences and how the Process brought her to an unusual way of coming to terms with a tragic past. 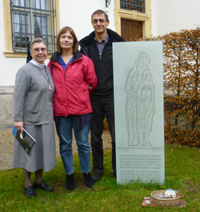 Unlocking the Past to Release the Future

Although she now lives in the UK, Anke was born and brought up in Germany, by parents who were both traumatised by war. Unable to deal with the atrocities they witnessed and the tremendous losses that they both experienced, Anke’s artist father had outbursts of violent behaviour and turned to drink, whilst Anke’s mother suffered from severe depression and eventually ended her own life when Anke was in her 20’s.

‘By the time I reached my early teens I was trying drugs and I was eventually taken into care in a home run by Franciscan nuns. With hindsight it is obvious to me that I was made the scapegoat for my family’s problems. The humiliation and abuse I experienced there is something I largely blanked out. In recent years, however, through the internet, I became aware that people in Germany were beginning to talk about similar experiences. Last year I revisited the home and the convent ‘Oberzell’ with my husband and saw that they had erected a monument to acknowledge and apologise for the way they had treated such vulnerable adolescent girls.

Finding a Way Out

When I came into contact with the ‘hippie’ movement in my teens I was very drawn to the joy and freedom I saw there which contrasted so much with my own experience of life. After I’d run away from the home several times, I was placed in an experimental anti-authoritarian commune, but instead of the love and joy I was hoping to find, I ended up on heroin. Aged 15 I had a profound spiritual experience and joined a Fundamentalist Pentecostal church. Here I was told that I had now been born again, old things had passed away and if I submitted myself to Christ and the church everything would be all right. At 19 I left Germany to live in another Evangelical community in Spain. Whilst there I married and had a son. When I was pregnant with my second son, my husband and I left the community and moved to the UK. Following the tragic deaths of my mother and brother I abandoned my faith, and later divorced. In 1995 I had another son called Paul and that year I decided to do a degree in Translating and Interpreting. This was an empowering step for me, as my education in Germany had been so truncated. Paul was born just before I started the course and, although it wasn’t easy to study with a new baby, I was thrilled when I graduated with a Master’s degree and was then able to work as an interpreter and translator. I also had a few short stories published around that time.

The Dark Night of the Soul

In 2000 however, tragedy struck again when my son Paul drowned aged 5. At that point the grief overwhelmed me. I could no longer ‘put a brave face on it’ and not talk about the past, as I’d been taught in Germany, so I got in touch with a support group for bereaved parents and did some trauma therapy. For the first time I heard that it was fine to feel my feelings; that there was no ‘right way’ to grieve and that no one can tell you how long you can grieve for. I also made some good friends in the group and saw how healing it is to share. At first I worked through my immediate loss, but over the years that followed I also grieved the loss of my mother and brother, and became aware of the unhealed ancestral grief in my family. All my childhood pain began to surface and I felt there would never be an end to it. At this time, when I thought that I was too screwed up to be helped, I kept coming across articles about the Hoffman.

Looking back now I realise that I had a naive expectation that in a week on the Process I might finally get myself sorted. I did the Process in Germany and found it really challenging. I saw that my life experiences had led me to believe that there was something fundamentally wrong with me. The course may not have been a magic wand but I connected with my rejected child and teenager and stopped judging myself for thoughts and feelings which I had previously considered unacceptable, bad or wrong. I emerged from the Process with a clear focus of what I wanted to live for and a deep yearning to connect with the people closest to me.

Rather than continuing to run away or trying to reinvent myself, I got in touch with who I really am and am now able to feel much more gentleness and compassion for myself. Because of my negative experiences with religion in the past I’d become very mistrustful of my spirituality, but the Process also gave me back a connection to my spirit that has been very sustaining.

What I like most about the Process is that it leaves room for an individual’s journey. It isn’t prescriptive about how you experience it – there’s no ‘right way’ to do it. It brings together wisdom from so many sources so that you can take what you need for yourself.

Epilogue – The Healing Power of Words

Two years after the Process I did the Q2, a 3 day intensive follow-up course to help me deal with what had come up since then. I decided in advance that I didn’t want to discuss my son’s death, as people might feel overwhelmed, but something on the course triggered buried feelings around it. I withdrew, but my teacher encouraged me to come back to the group and talk about it. Many in the group were actually very moved. In fact, as I shared, all the fairy lights in the room suddenly came on for no apparent physical reason and it became a magical moment. Now, since returning home, I feel much more energised. I’ve started reading books by Hoffman graduate Debbie Ford about the importance of investigating our shadow and I can see that by blocking off the pain of the past I had also blocked off the gifts it had for me.

I’m writing a book about my experiences with the title When I Was Coming Back and can feel joy and creativity beginning to come into my life. My first short story since Paul’s death was published a month ago in a National German newspaper and won a prize. My sister in Germany was so moved that she cried when she read the story, and she and her daughter came to Berlin to see me receive the prize. My sons have been asking me when the book will be finished and I realise that this an easier way for them to access my background, which is of course also their history, and has affected their lives. Last year I married Michael, my second husband, who is pictured with me next to the monument, above. Although we met 7 years ago in the UK, Michael had lived in Germany for over 30 years. He had a lot of insight into my “German-ness” and played a crucial part in encouraging me to seek therapy and heal my past.

When I first considered doing the Hoffman Process I felt that I was too old, that it was too late and that I had too much baggage. I was scared that if I started to investigate the pain of the past that there would never be an end to it. I realise now that I simply needed to know that I was worth it.

In April this year, at the annual meeting of the VEH (Verein Ehemaliger Heimkinder), I interpreted for Jim Goddard who is the chair of the Care Leavers Organisation in the UK. Both these groups support adults who were in the care system. For more information visit: www.veh-ev.eu VEHeV (German Association of Former Care Home Children) and www.careleavers.com (UK). For more information about the exposure of German care homes at that time, here is an article in the Independent newspaper,

As Anke mentions above, her son Paul drowned when he was 5 years old. To commemorate what would have been his 18th birthday in 2013 she brought her blended family together including her current husband, her ex-husband and his wife, her sons, her sister and her sister’s children. She was very touched when three brothers, who used to be Paul’s playmates when he was young, were also keen to join them in remembrance.

‘Even though not all my friends and family understood my reasons, they came along out of love to support me. I didn’t know how it would unfold but one of those synchronistic encounters happened. I was in the office of Compassionate Friends, an organisation which helps anyone who has lost a child or a sibling, and a wonderful South African man who works there called Buz offered to facilitate our gathering.

There was some apprehension before the gathering but Buz, who is also a healer and hospice chaplain, helped it to feel normal – as indeed it is in many cultures – to remember those who have passed at key moments. For me the most moving aspect was to see some of the young people bravely expressing their grief and pushing through it. My niece, aged 15, was unable to speak but started sobbing, then wanted to run out of the room feeling embarrassed by her tears. I managed to catch her and hold her, and told her that she didn’t have to leave; that crying was nothing to be ashamed of. She sobbed in my arms for what seemed a very long time and then returned to her seat smiling. This freed up the others to be even more genuine about their feelings and it also brought some healing to my lifelong pattern of leaving when my emotions overwhelmed me.

Paul’s friends all thanked me for the chance to talk about what happened when they were so young. Despite their ultra cool exterior (they’re all musicians now) they were genuinely moved. During the gathering I happened to mention that I always used to see a robin on Paul’s birthdays and the anniversary of his death, then one of them burst out laughing and said that when they used to dress up as Superman and Batman, Paul always wanted to be Robin!

My ex-husband and I took the chance to share about our time together which our sons found very moving, as they were able to witness how much we had meant to each other. Together we created a safe space where tears could flow freely and it ended with a sense of tremendous love and connection, not just to Paul but also to each other.’

Anke had a short story published in New Writing Cumbria which she read at Words by the Water Literature Festival in Keswick earlier this year. Her book detailing her story is nearing completion under the name Anna Jenak.