Against All Odds: with Aidan Campbell

Aidan Campbell was a successful business consultant with a lifelong passion for self development. When he was diagnosed with a brain tumour he needed all his resources to bring himself back from the brink. Here’s his prescription for a happy, fulfilling life. 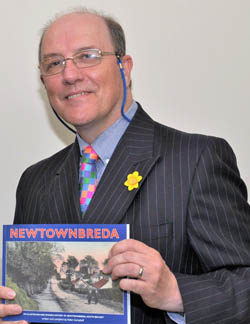 After completing the Hoffman Process in 2002 I felt a bit like the Buddha after he’d spent 20 years sitting under the Bo tree in contemplation. Apparently his first words on re-joining the world were ‘This cannot be taught!’ – in other words you can read about it, learn about it, hear about it but at the end of the day you have to experience it. When I was diagnosed with a brain tumour six years later, aged 51, I was so very glad I had.

What took me to the Process was a passion for learning how to the make most out of life. Thirty years ago a friend, who knew I was going through a challenging time, gave me three books: How to Win Friends and Influence People by Dale Carnegie; a popular psychology book called The Road Less Travelled by Scott Peck and a more spiritual tome called Autobiography of a Yogi by Paramahansa Yogananda.

These got me thinking about life and where I was headed. I embarked on various ‘change your life’ programmes and courses. I read anything that could be loosely termed success psychology, self-development or consciousness expanding. To develop my spiritual side I became a ward volunteer at the Marie Curie Hospice, serving meals and talking to patients suffering from terminal illness.

By 2002 I was making good money, was successful, had status, drove a nice BMW, stayed in the best hotels when travelling but I was unhappy and unfulfilled. I’d been very messily divorced and then formed a happy new relationship with Christine, who’s now my wife, but I was aware that my old destructive patterns were emerging once again. Determined to make a fresh start, I closed my business consultancy down and travelled from Belfast to Seaford on the Sussex coast to do the Process. The taxi driver who drove me there from Gatwick was called Moses – well, he certainly took me to ‘the promised land’! I came back from the course totally uplifted. I particularly enjoyed strengthening the connection to a more spiritual side of life which, though I didn’t know it at the time, was to stand me in such good stead with what lay ahead.

In 2007 I began to lose weight, suffer from headaches and I’d forget things (like my ballroom dancing steps). There was a lot of mis-diagnosing by the doctors – ‘food poisoning, working too hard, not getting enough sleep, not eating enough vegetables, old age’ etc. So in true Hoffman fashion I became present to my experience and was able to spot all the guess-work in the health service and paid cash privately for a diagnosis – it turned out be a brain tumour! I would have to have surgery sooner rather than later so in short order I wound up my business, put my affairs in order and went under the knife.

I did not think I was going to make it – but I did. Christine says I’m stubborn and awkward but I prefer adjectives like focused, determined and responsible. I’m very used to setting objectives and what’s known as ‘task orientation’ or in plain English – ‘getting things done’ and not taking ‘no’ for an answer. In tandem with what I took away from the Process, it was just the toolbox I needed to see me through

From Acceptance to Surrender

At one point during my time in hospital I weighed only 9 stone, although I’m 6 foot 2″ tall. Yet I survived! Looking back on it now I realise that I reached a point of surrender – it was not up to me whether I lived or died. Six weeks into my stay I met a couple of visitors, complete strangers, who made me think about my situation from a spiritual perspective. It seemed that, once I’d met them, in the twinkling of an eye I was discharged and sent home.

Many challenges still lay ahead: I had to learn to walk again, eat again and find a new way of living – Christine was a great support and took 6 months off work to look after me. I was determined to get off all the medication following my surgery, radiotherapy, physiotherapy and a plethora of clinic visits and associated paraphernalia.

I survived on rice pudding, soup and other soft foods for months until my swallow could handle solid foods and I could eat properly again. I missed the insertion of a tube into the stomach by a whisker! 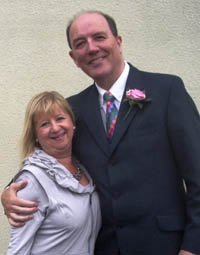 A Change of Roles

The resulting depression was difficult – more pills from the NHS – but I knew this was not the answer – so I unilaterally stopped taking them and, using my toolbox, I worked my way through the side-effects. I still suffer from waves of tiredness and my balance and coordination centre has been damaged so that I can’t drive now and need to move around carefully.

I found that one of the most challenging side-effects was the loss of independence and mobility. I was used to a ‘get up and go’ mentality but now I was needy – I had to learn to rely on the support of others, friends and family. I remember that I took my watch off when I was discharged from hospital and didn’t wear it again for 6 months. All the objective setting and success-psychology stuff was great and it worked too – as long as I was capable and independent. Once I was more vulnerable a different set of tools became important.

The Gift of Life – Passing it Forward

Now my talking faculties have recovered I regularly give local history talks in Belfast, write local history books and press articles and contribute to local TV and radio. All this helps to raise funds for local charities such as Marie Curie Cancer Care, Guide Dogs for the Blind, MS and Missions to Seafarers. I’m inspired by a quote from Jennifer Worth of Call the Midwife fame: ‘Great Spirits never rest on their laurels, there is always more to be accomplished’.

My wife Christine and I are now grandparents and my experience has deepened my appreciation of so many things. Hoffman helped to get me grounded, to realise that I am not my patterns, forgive my parents, live a worthy life and be an asset in all my relationships – to be part of the solution and not part of the problem. It should be on the school curriculum – as essential to living a good life as much as English or Maths – and lastly I realised that ‘the richer you get, the more expensive happiness becomes’. 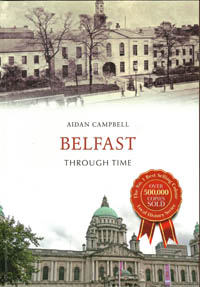 1. Invest in yourself. Get educated or trained. What do you read? Consider studying the lives of inspiring people who have done great things, overcome challenges or made signifiicant discoveries. What motivated them? What moment changed their lives? Who influenced them?

2. Be aware of your purpose in life. What can you achieve? What are you getting out of bed in the morning to do? Is it something edifying, constructive or worthwhile?

3. ‘You must have love’ as somebody said. A close relationship with your partner and family is an essential means of support and a source of good feelings and well-being.

4. Develop like-minded friends in a nurturing social network. Browse ‘Meet Up’ for a huge range of interest groups, get to know your neighbours, try attending your local church, history society, walking group or gardening club.

5. If you do experience a setback in life, such as major surgery or a life-threatening illness, then arrange for somebody in your circle that is trusted or a faithful witness to record events as they happen to validate your experience and enable you to reflect on it later. It may also be helpful to keep a diary yourself. When the Americans liberated concentration camps at the end of WW2 and saw what happened to inmates Eisenhower directed film cameras and photographers to record everything as proof. Otherwise, he said: ‘The day will come when some sonofabitch will say that this never happened’.

6. Look after yourself. Eat well. Drink in moderation. Take exercise and get a good night’s sleep. Avoid addictive substances – there are no shortcuts to the good life.

7. Experience an element of ‘self-transcendence’ – go beyond yourself to something greater. Volunteer for free with a local charity. Coach children to play sports. We live in a world where the currency of life is getting money and not giving of ourselves. Money cannot be eaten. 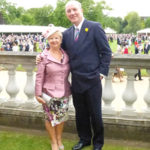 Aidan was recognised for his years of successful fundraising on behalf of Marie Curie in the 2017 New Year’s Honours list. He was awarded a British Empire Medal by the Lord Lieutenant at Hillsborough Castle near Belfast and later he went to Buckingham Palace with his wife Christine to meet the Queen and enjoy one of her famous garden parties. What an inspiring journey for someone who ‘put his affairs in order’ in 2007 – our congratulations!