A Gift Wrapped Future: with Chantel and James Villiers

Chantel, a nurse and James, a chef, ran into some relationship issues early in their marriage when Chantel was carrying their first child. Chantel’s uncle, Simon Donnelly, suggested that the Hoffman Process might bring them both some clarity. Thanks to his financial assistance, they have now both done it; their communication is better, their relationship is stronger and they’re able to be the kind of parents they wanted to be for their beautiful new daughter, Alexandra. 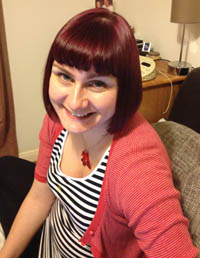 ‘Shortly after James and I got married in September 2012 it became obvious that all was not well with our relationship. It reminded me of an earlier time in my life. My mother had me when she was only 17 and it was tough being a young mum. When I was 14 she finally had a breakdown so my grandmother became my guardian. There was no counselling available for me at that time. I asked for help but the most I was offered was a social worker. The system seemed focused on physically protecting children but it didn’t offer much emotional support, which was what I most needed.

My mother had acted very out of character in the run up to her breakdown and I was struggling to make sense of how she’d treated me. We’ve talked about it since, so I know it wasn’t her fault, but when I saw James acting strangely I felt a similar sense of shock and deja vu. 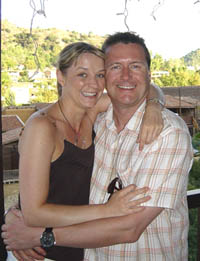 When it came to a head I left James and went to stay with my uncle Simon for a few days to get some perspective. After talking my situation through with him and his lovely partner Carol (pictured left) I realised that I had to ‘fix’ myself before I could fix our marriage. My biggest issue was that I didn’t feel good enough and I had a strong perfectionist pattern. I really didn’t want to pass that on to our baby.

Simon had done Hoffman about ten years earlier and Carol did it in 2012, so they had a lot of insight into family patterns. Simon generously offered me the Process as a gift, so I enrolled on one in March 2013 which was the first suitable one, given that I was pregnant.

In the meantime James and I began couples therapy but I didn’t feel it helped because the sessions didn’t give us any strategies for how to deal with our feelings when they arose. The Process, on the other hand, showed us how to deal with our feelings in the moment as well as encouraging us to prepare for each day with a quick personal check in so we have an awareness of feelings before they build up and become a problem.

I noticed during our couples therapy that James didn’t just struggle to express his feelings but he actually wasn’t aware of them and that’s the difference the Process made for both of us. On the course saying we were ‘fine’ wasn’t an option, we had to name our feelings every day (you’re even given a list to choose from!) and that really helped to build our awareness.

Carol had told me: ‘You’ll never cry so much and you’ll never laugh so much as you will on the Process’ and she was right – it was so true. My Hoffman teacher, Gabi, was amazing, and she showed me how to protect the baby such as putting a pillow over my tummy when we were doing anger release exercises. She also gave me extra chances to rest, as the pregnancy made me very tired. The sixth day of the course was the turning point for me. I suddenly had a clear vision of the life I wanted to give my child, full of happiness and appreciation and I decided that I would be happy on my own account, whatever direction our marriage took.’ 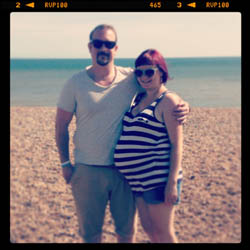 ‘I felt our relationship problems began to build soon after our wedding and the crisis point for me came in February 2013 when I walked out of my job. I could feel parts of me shutting down; it was quite frightening. Chantel went to stay with Simon to give herself some breathing space.

I’ve known Simon a long time and he’s like our guardian angel. He’s a very good listener and he always gives great advice. When I went to pick up Chantel I stayed at his house for a couple of days. He and Carol were fantastic, they spent a long time talking things over with us. For much of my life I felt that people either talked at me or talked down to me whereas Simon talks to me.

My parents are from a different generation who don’t ‘do’ emotions, so I wasn’t used to getting in touch with my feelings at a deep level and I found the couples therapy difficult. Then in March Chantel left for the Process and I didn’t know what to expect. She was depressed when we said goodbye but she came back a different person. She was happier, more open and more willing to discuss things, so when Simon offered to lend me the money for the Process, I decided to give it a go myself two months later.

I have severe dyslexia diagnosed at Primary School. When I was eleven I had the reading and writing skills of a 5 year old.  It meant I got a lot of stick as a teenager I had to have extra tuition in special needs classes. It made puberty very challenging, so when I saw the pages of pre course work for the Process I felt pretty daunted. I was worried about being judged for my spelling and that the teachers may not understand how I expressed myself.  The journalling on the Process brought up difficult memories of when I was studying for GCSEs which was actually useful as I was able to work through them.

I’m not very confident meeting new people so I found the start of the Process quite challenging. There were people on the course who were highly paid professionals so I felt I might be judged for my tattoos and be seen as a bit of a hooligan. But by the end of the week I felt totally comfortable. I could talk very freely in front of everyone; I came out of my shell and really blossomed. The fact we had no mobile phones really helped, because it meant that we communicated without distractions.

I liked the Process because nobody pushed me to open up before I was ready or to share when I didn’t want to. The teachers just created a really safe space and waited until I felt willing to share. It was very helpful to have other people going through the same thing as me, because it really takes guts to do the course. It was one of the best and one of the worst weeks of my life. I felt very sad when it was over but I was so excited to be seeing Chantel again. I came home on such a high I don’t even remember the journey, I just remember seeing her come round the corner and us hugging and kissing.

I know now that I am who I am and I don’t need to be approved of. As far as the Process is concerned I’d say it doesn’t matter who you are, where you’ve come from or what you do – just go for it’. 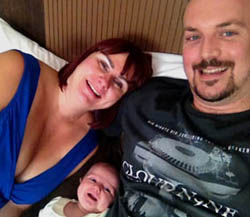 Chantel continues: ‘When James was on the Process I went to stay with my mother and integrated some more of my own Process experience. I hoped James would get some clarity about our relationship. When he got back, as soon as I saw him, I could see that he’d changed. I gave him plenty of space and time alone that first weekend to adjust to all the shifts that he’d made. I find that he can identify his feelings now and express them better. He’s much more at peace.

We both know that our new daughter Alexandra is going to learn from our relationship. Now that we’ve done Hoffman we can see that it’s our actions and emotions that affect her more than our words. We try to be happy and positive around her and we do any emotional clearing away from her. Because we’re calmer we find Alexandra is calm too. We still have disagreements but they are fewer because we are more likely to speak up as soon as something bothers us rather than wait for it be a major issue that could cause an outburst. As a couple we’re now looking at the future rather than dwelling on the past.’